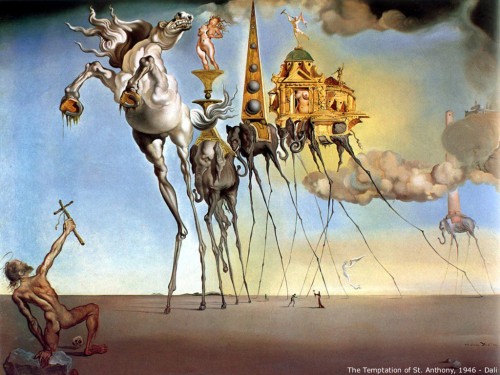 With a skull and a crucifix I awaited their arrival. We had known they were coming for three days now, the tapping of the needle-pointed legs gradually growing louder into a tortuous slow stampede. We saw them coming through the clouds, disturbing the city in the sky which had sat there peacefully for more than two thousand years. At the front was a wild horse, bigger than any I had seen before, no doubt reared on the Devilish milk from the very witch who led them. She stood upon a pedestal on the back of a needle-legged elephant, cupping her womanhood sensually, sexually. (I could almost see the ants crawling all over her). She brought with her the empire’s most prized possessions: an obelisk for wielding more unearthly magic, the palace of nymphs and bacchants, and the Fallen Angel.

But I remained with a skull and a crucifix, steadying myself against the fear which shook me, bracing myself for the onslaught. We don’t know why they chose our land where the sun is so harsh it burns long shadows on the ground. But we know that we belong to them now in their tower, grotesquely tall and strong like the very things they stole us for.

Once the horse had landed from rearing the whole earth seemed to reverberate form the force; I knew my thin bone skull and my wooden crucifix would not protect me. Even the halo above my head began to waver. I became afraid of my nudity, the vulnerability it bore me, and fled. But I could not escape the reaching grasp of the witch-woman.

So our land is no more our land but simply another field succumbed to the Devil-woman’s magic.