Brecon cathedral is small and full of nooks and unexpected objects and paintings. It is no bigger than many a largish parish church, has no architectural magnificence, yet is a pleasant and homely building that is unexpectedly rich in sights and objects. It has only been a cathedral since 1920 following the disestablishment of the Church in Wales. Before then it was just the local parish church, and before that it was an abbey until the dissolution of the monasteries in 1537. 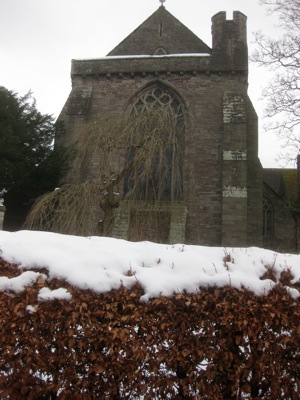 Dating in part from around 1215, by the 19th century it was in poor repair and only the nave was being used. It was not until 1860 that the building was completely renovated. Brecon cathedral reminds the visitor that all a building needs to be called a cathedral is to house a bishop’s chair. This is known as a cathedra and the derivation of the word cathedral is not hard to espy. To be a cathedral requires no great soaring architecture, no deliberate creation, it is purely a title given when a political decision has been made. This shall be a cathedral, comes down the message from on high, a cathedra is moved in and bingo, a new cathedral has been created. 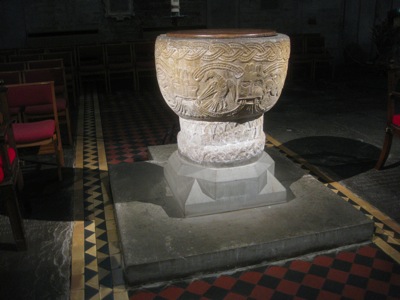 The font is an amazing piece of sculpture that features the Green Man symbol. This suggests that it may be older than the 12th century date that it is often given. Even so, it is probably the only part of the original church that remains today. 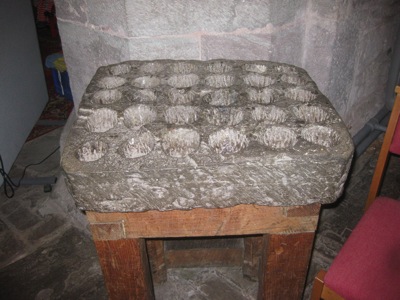 This is found by one of the arches in the cathedral and is called a cresset stone. It is the largest remaining in Wales. Each of the dips would have been filled with oil, helping to light the way for monks who had to get up for prayers in the middle of the night. Recently it has been used with tea-lights in each compartment. The cathedral has several interesting quirky items and is a great museum as well as a place of worship. 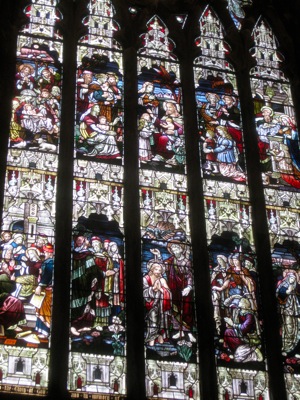 With a healthy dose of sun outside the stained glass windows allow the coloured light to permeate the building. Amongst other treasures there are oil paintings, a 15th century Flemish cabinet, effigies in wood and stone, a piscina and of course the cathedra. The reredos behind the high altar is a complex piece of sculpture carved by W D Caroe in 1936. 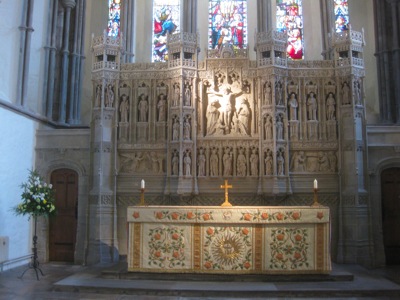 That this cathedral is more interested in people than pomp is reflected in the large children’s corner at the back of the building. Though it may not be on the list of must-see cathedrals, Brecon is a small and has a simpler beauty than many ecclesiastical buildings. If you are in the area it is worth a visit. 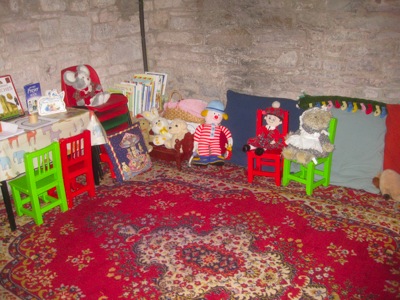