Any urban dweller is used to the chants of Big Issue, Big Issue as they walk around a British city. Indeed one of the greatest evils of modern British society is the number of people who are forced to live rough on the streets. Big Issue salesmen and woman are the most obvious face of this phenomenon. Clearly something has gone wrong with a system that allows this to happen and allows homeless people to be shunned and ignored.

I had already walked past two Big Issue salesmen that day when I crossed a road and passed another.

I carried on walking, up a slight incline. I could see another man holding out magazines towards me, although I wasn’t concentrating, homeless people just becoming part of the cityscape in the same way as fire hydrants and bins – something else to avoid.

I walked past, then stopped as my brain filtered the information I had heard. What had he said? It didn’t sound like the Big Issue, Big Issue I was all ready to tune out. I turned round and looked again. He was tall and weatherbeaten and holding several copies of the New Scientist. I was torn. Speaking to homeless people is not high on my list of things I try to do everyday. But there he was, selling New Scientists and making me wonder what he was up to. Did he ever sell a copy? 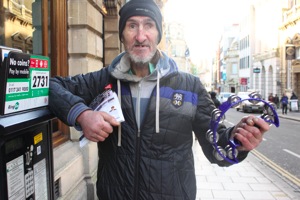 I considered buying a copy, but science is not a subject I have ever felt needs to be studied out of school hours. Instead I approached the man, who looked injured and unwell, and yet at the same time oddly enthusiastic. Maybe that was the effect of the tambourine he was holding. I started talking to Simon who told me he did sell lots of copies. Not only that, he had regular customers.

His brother had put him on to the idea.

‘He suggested I sell the Big Issue, but there are too many people selling it here. So I went to ask the students what magazines they would buy. They told me four – The Economist, Private Eye, New Scientist and The Spectator.’

This was the first time I had heard of a homeless person doing market research and it sounded amazing. He bought the magazines for x and sold them for >x  like all good business men. If he had any issues left over he offered them as a bonus to new purchasers.

Simon ended up on the streets owing to mental illness. He’s been there for seven years.

‘But the thing was I started liking it. The freedom.’

Later he told me he got a lot from tatting. Don’t worry, I had to ask what it meant too. Tatting means going through bins. Simon told me that supermarket bins are a good source of food whilst it is amazing what people throw away. He has found ipods, laptops and computers.

‘Do you play the tambourine?’ I asked.

He gave it a rattle and smiled.

Visit Homeless.org.uk for information about how you can help the homeless