Like many of us Miles Jupp had a dream. Again, like many of us, that dream was to be a cricket journalist. There are two main ways in to this perfect career – years of journalism experience and luck, or playing cricket for England and luck. Being an actor from the children’s programme Balamory and not having played cricket for England Jupp didn’t fit into either of these categories. A different man may have decided then and there that cricket journalism was not for him. There is nothing wrong with such a realisation. Many have been forced to make it. 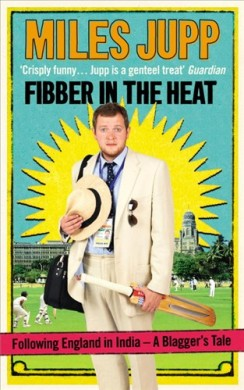 But Jupp had different ideas. Surely, he reasoned, if he turned up at a ground, sat in the press box and wrote about the cricket, he would, almost with noticing, have become a bona fide cricket journalist. Which explains how he why he was in India at the start of an England cricket tour, mixing with the other journalists and ex-players and trying his darnedest to get a press pass.

He had the connections to get the Western Mail in Wales to agree to carry stories about England’s sole Welsh player Simon Jones. This, and a similar gig from BBC Scotland, who have next to no interest in cricket are the keys to his attempts to write about the cricket and get his hands on the elusive press pass.

Written in a light, self-mocking manner, the book is based on a one man show that Jupp toured after his return. The book is an admission of lying on a grand scale, but even through this the reader happily remains a Jupp fan. If you don’t like cricket then there will be the odd page or two you will skip, but the subject is mainly the humourous attempt to write rather than the sport of standing around in a field for five days and then shaking hands.

If you do enjoy cricket then Fibber is a fun read, bringing humanity to some of the commentators and explayers that talk about cricket on the TV and radio. Jupp ends up realising that the job of a cricket correspondent is work, and the fun of cricket has been drained out of the press box. He returns to the fans’ enclosures wiser and happier and still a fan.

Buy Fibber in the Heat