Renowned Indian contemporary artist Paresh Maity is exhibiting 12 watercolour works and a bronze sculpture/installation he has executed recently at a solo show at Singapore’s Art Stage. Art Stage is one of the most famous art events internationally. World renowned artists who customarily figure at Art Stage are Pablo Picasso, China’s Ai WeiWei and UK’s Damien Hirst and Anish Kapoor. This is Paresh Maity’s third solo at Art Stage and his sixty-first worldwide, including those in India, a feat of sorts for a relatively young Indian artist who is in his late forties. 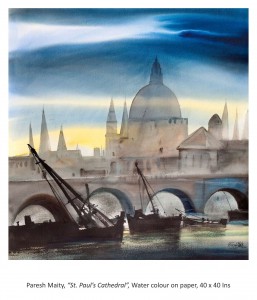 The show is being in staged in Singapore by one of the well-known Indian galleries, Gallery Sumukha. Titled River of Memories, the paintings produced in vibrant colours and the striking installation of a life-size boat created from small boats, bring to the fore the indelible impact that the element of water left on Paresh’s life. Paresh spent his childhood and youth in the obscure town of Tamluk in Bengal, surrounded by rivers and ponds. In the process, water shaped Paresh’s artistic sensibilties and became an inseparable part of his ouvre of works.

“Water adds a huge dimension to life. I have throughout tried to capture this wherever I have travelled to both within and outside India,” remarks Paresh. 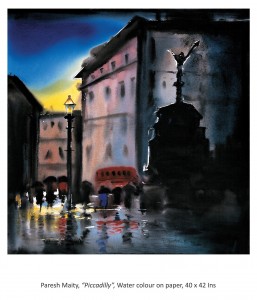 Paresh Maity’s rendezvous with water goes back to his years as a child when he accompanied family and friends to immerse idols in his village river. A journey that began more than four decades back, has come a very long way. Over the years, as Paresh grew into an artist in full bloom, he has translated his visual experience of waterways and water spots across India and overseas into unique canvases. Figuring at Singapore’s Art Stage are reflective works revolving around Bengal, Varanasi and Kerala in India, and the Thames in the UK, China’s Yellow River and the timeless waterways of Venice.