In Ancient Egypt the penalty for killing a cat was execution and in China a similar punishment has awaited anyone who killed a Pekinese dog. Our relationship with these two animals may be less life-threatening nowadays, but it is rich and complex and deserves examination.  As the two species with which humans are most at home, the cat and the dog have been artists’ subjects for centuries. Cats have symbolised fertility, freedom and lust, as in Manet’s Olympia. Dogs get off more lightly, most often used as symbols of fidelity and loyalty. Sometimes these animals are the unquestioned star of the piece, but usually they sneak into portraits and landscapes almost as part of the furniture. Like many things that are familiar their position has been ignored and underrated. However The Royal West of England Academy in Bristol has recently opened a new exhibition entitled ‘Reigning Cats and Dogs,’ which aims to reexamine the position of these domestic creatures in art. 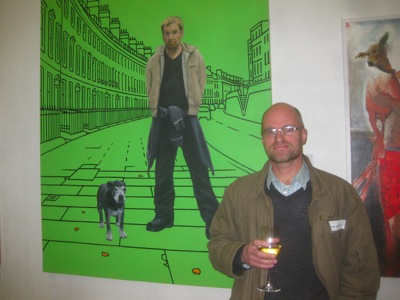 Ben Hughes with his painting Jim and Charlie

Curated by Hereford-born Peter Ford, this is the third show he has created with an animal theme, following A Focus on Fish and All Creatures Small. Reigning Cats and Dogs has been a year in the planning and is not restricted to any one art form. As well as painting, sculpture and photography the 250 exhibits include printmaking, artists’ books, postcards and illustration. Ford has chosen works that approach the theme from different directions, the most obviously catty being huge regal oils by Angela Lizon. These are extravagant works, treating pets like movie stars or absolute monarchs. You get the feeling that they are in charge, that one of the cats phoned the artist and asked for a portrait. Other pieces only mention cats and dogs obliquely, like Emilie Saint-Pe’s Chinese and French artist’s book Comme Chien et Chat which represents animals in calligraphic typefaces.

This exhibition is not a po-faced study, or a comedic collection but instead a mix of the humorous and serious which makes for an eclectic visit in the company of man’s favourite friends. Ben Hughes drains his picture of all but the two subjects, focusing attention on the dog as much as the man. Merging a pop art heritage with a skilfully rendered portraiture he achieves an attractive mixture of old and new.  The dog appears to be impatiently waiting for the artist to finish and regards us with suspicion, his independent character well caught in oils. 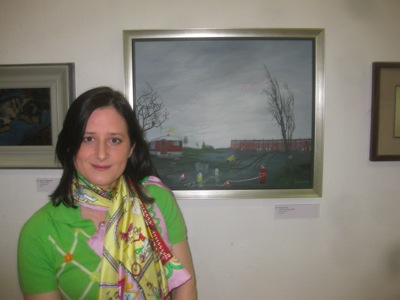 If the dog is easy to spot in Hughes’ work you have to work harder to find the cat in Holly Brodie’s narrative piece. Brodie finds inspiration in literature and creates works that tell a tale. Suburban deluge shows the aftermath of a storm in precise, muted oils.  The work has an otherworldly aesthetic that brings some works of Lowry to mind. If you are still searching the cat is hiding in a discarded supermarket trolley.

Most of the work in the show is contemporary, but there are original pieces lent for the show from 1777 and earlier. Other well-known animals in art are represented by postcards from heroes of art history such as Durer, Rubens and Hogarth. There are also cards of classic New Yorker cartoons. In one of these a dog is moaning about his life and saying to another dog, ‘It’s genetic. My father was a dog and I’m a dog.’ A bit of light relief is always welcome amongst more serious works and in a show with this theme it would have been remiss not to refer to the humour and fun that pets can bring.

The exhibition takes up the five large upstairs galleries at the Academy and the artists showing are from all over the world. There is documentary work, as in the images of sniffer dogs by  Eleanor Heaford. These are formal photographic portraits, individualising working dogs with a focus and clarity which appears to bring out each dog’s personality. 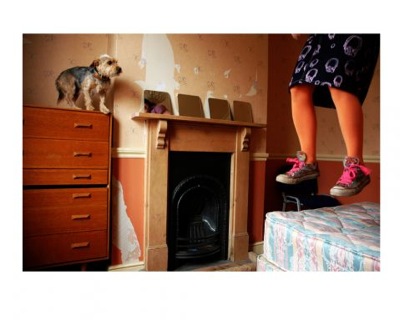 Self-portrait with legs by Sarah Francis

Self-portrait with legs by Sarah Francis seems fun but on second look the image is darker than it first appears. The dog seems worried, wondering what his mistress is doing, maybe thinking there are more useful things she could be doing, like wallpapering the room. Poised to imitate the bouncing girl, but uncertain of success, the dog is a study in uncertainty. Up close you can make out part of the jumper’s grin in the nearest mirror. It adds a further childish element to the work and brings forth questions of responsibility and playfulness. 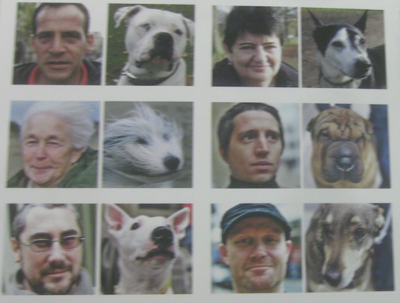 Dogs with their Owners by Anthony Garratt [part]

So do owners look like their pets?! A large photography piece by Anthony Garratt investigates this theory, a section of which is reproduced above. The evidence is unfortunately inconclusive, though there are enough similarities to make the piece humorous and one of my favourites in the show. 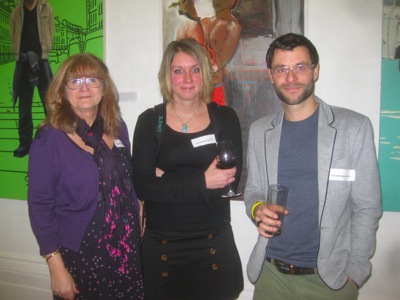 Trish Lock, Rose Sanderson and Anthony Garratt all have work in the show

Reigning Cats and dogs is a large show and this is only a small sample of the works that can be seen. There is delicate digital animation by Lukasz Pazera and a cute picture of a kitten by Lucy Willis, joyfully rolling on its back with its legs in the air. At least it appears cute until you read the name of the piece. That shock makes you see the image in a different light, and makes you question what else is not as it seems. The title is Roadkill.

This could have been a sentimental and whimsical exhibition, but Peter Ford has put together a strong collection of interesting works. There is a theme running through the rooms, but you do not have to be an animal lover to enjoy the show and any visitor will find more to give them thought than they may have expected.

The Royal West of England Academy