Not many things survive 2500 years. Usually you have to head to the British Museum to experience anything that old, but until 14th March 2015 you can see Antigone at the Theatre Royal Stratford East. Industrious tragedian Sophocles (years on earth – 90, plays written – 120) wrote his best-seller back in 441BC, when Alexander the Great wasn’t even in short trousers. It’s a date so far away as to make W. Shakespeare look like some Johnny-come-lately whose plays have yet to survive the test of time. In our 21st century of built-in obsolescence and quickly changing fashions it is remarkable that this play from Ancient Greece is still deemed relevant enough to be performed. 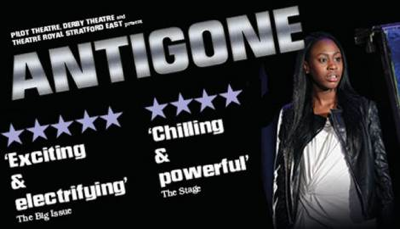 But this production by BAFTA award-winning playwright Roy Williams is a very free adaptation. Directed by Marcus Romer, Williams’ script keeps elements of the ancient plot but drops others, whilst completely new scenes and vulgarities are added. Conversations that Sophocles didn’t write are depicted, with most lines spoken in an urban inflected English heavy in slang. Oddly for a famous tragedy, deaths and their causes are changed and people who should die remain standing. It’s a little like it must have been watching Nahum Tate’s happy ending version of King Lear which for years supplanted Shakespeare’s original on the British stage.

Antigone’s action is set today in a world of half-completed reinforced concrete pillars and threatening metal gates. Hat tip to the lighting designer Alexandra Stafford, but it is the set design by Joanna Scotcher that is one of the high points of the production, evoking the noirish underground world of Harry Lime’s Vienna. Here we meet Creo, originally King of Thebes, played as a wannabe ruthless gangster  by Mark Monero. He splutters, shouts and ridicules and gives a strong sense of an over-promoted man desperately playing a part he feels is slipping away from him.

On stage a wheely-bin has had two sides chopped off and been upholstered to contain a smart sofa. Creo sits on this absurd pimped up dumpster as though it is a throne. It’s a telling symbol of Creo’s rotten life. His tiny world of power and luxury is – if he looked more closely – in fact part of something repellent.

We start at the same point as Sophocles’ original. In recent battles Antigone’s brothers Orrin and Eto have both died, fighting on opposite sides against each other. Loud and stubborn Creo has decreed that whilst Eto will be laid to rest with honours, Orrin will be left unburied, to be destroyed by dogs. Antigone (here known as Tig) ignores this decree and tries to bury her brother. Creo isn’t impressed with her filial love and her insouciant power struggle, well pitched by Savannah Gordon-Liburd, seals her fate, allowing the audience to contemplate what is the right way to behave when faced with a tyrant.

Video projections are used throughout, with characters and images appearing high on various parts of the set. References to the power of Greek gods have mainly been dropped from the text, but these projections – many live closeups of an actor already on stage – suggest something more contemporary. Many humans like Creo and Tig have elevated themselves to positions of gods, sitting in judgement over their own behaviour. How strange it isn’t when they judge that they’ve done the right thing. Creo does not realise his errors and notice his misplaced confidence. He does not suffer the complete familial destruction experienced by the ancient character on which he is based. We leave him as we found him, a stubborn self-made fighter who has learnt no lessons.

Undiluted Greek tragedy is not a natural MTV/BBC3 crowd pleaser which is the demographic this version of Antigone aims for – producers Pilot Theatre saying they deliver work ‘for, by and with young people’.  Judging by the faces at the Royal Theatre Tig appears to be successfully capturing the yoof but this version is only inspired by Sophocles and is not for purists. Unlike the original I doubt it will still be performed in 4500AD.