Consuming Spirits took 15 years to make and was finally completed in 2012. The film combines several animation styles and techniques including hand drawn, stop motion, but mostly paper cut out. The film can be seen as an animation epic and puts  Director and Animator Chris Sullivan up there with other auteurs such as Bill Plympton, Ralph Bakshi and Jan Svanmajaer, as animators who have managed to create feature length animated films despite the laborious nature of the process.

Consuming Spirits itself was shot on 16mm and looks impressive on the large screen. The somewhat jittering nature of the paper cut out style adds to the aesthetic charm and shows the filmmakers fingerprints on the film. The different styles run seamlessly between one another and do not jar, they actually add to the unique visual appeal of Consuming Spirits. The colours are not bright and bold, but dark and insipid. Pale blues and greens create a dullness that contributes to the blandness of the characters and the slow pace of the story. However there is a tension and an interesting story boiling underneath all this, which comes to a head during the dramatic and tense conclusion of the story.

The story itself involves a botanist radio DJ called Earl Grey and how his life intertwines with other characters including Victor Blue and Gentian Violet.

The soundtrack mainly focusses on folk songs, which seems fitting to the small town that we are located in. It almost feels surrounded in folklore and ghosts, harking back to the title of the of animation – Consuming Spirits. The town itself almost has a Twin Peaks or Fargo type feel to it – a small snowy town with a contained population. The Coen Brothers influences is apparent  with the comedic and lyrical script and Earl Grey himself going on monologues that are poetic yet humorous in style. 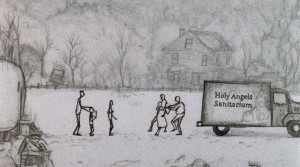 The problem with Consuming Spirits is that it is too long. Lasting over 2 hours, the story seems to be in slow motion at times, with the pacing being almost as laborious as the technique. However behind this is a touching story involving interesting characters. The dialogue helps us endear to the characters, even though the voice recording is not exactly high quantity (sounding as if it has been recorded in a wardrobe) and the vocal performances feel rigid.

Consuming Spirits screened as part of the animation strand at the Manipulate Visual Theatre Festival. Taking place in Traverse 2, a theatre space, which has been transformed into a cinema. Consuming Spirits seemed to fit well within a programme which featured experimental animation (an ecliptic shorts programme and the graphic novel adoption Isobel Nobel) and live action (The Quay Brother ‘Piano Tuners of Earthquakes’ and the Japanese animation and live action amalgamation ‘Big man Japan’).

Overall it is impossible to talk about Consuming Spirits without looking at the technical achievement of its author. However a tighter story could have cut down on production time and benefited the movie as a whole. Nevertheless Consuming Spirits is a truly original story with unique visuals and a fine example of what can be achieved in animated storytelling. 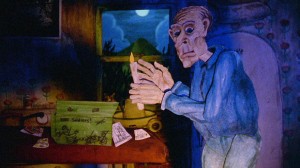