Normally art galleries are quiet and contemplative. It’s what puts people off them, sorry, I mean, it’s why people like them. Things are very different at the Martin Creed show at the Hayward Gallery. Walk into the first room, past the sofa that deliberately blocks the entrance and you’ll be met by a cacophony of metronomes, all beating out a different rhythm. Even to get that far you’ll have had your height checked. Any taller than 6’6 and you have to use a different door. Heightist, but sensible. There is a large rotating metal sign that will take your head off if you’re not careful. It is emblazoned MOTHERS, giving the show a pessimistic start. Do anything you can to avoid a clip round the ear from this mother, you’ll be off to hospital with a broken skull. If you’ve hoicked a child onto your shoulders to give them a better view over the crowds, don’t go anywhere near. 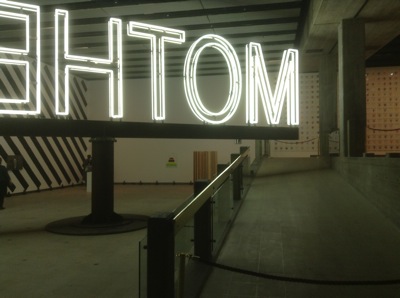 Martin Creed is wary of calling his work art. He certainly doesn’t claim it to be conceptual art and when pushed calls it expressionism. But his is not the Expressionism of Die Brucke, Munch and the other early 20th century modernists. Rather he relates what he does to the everyday activities of all of us. ‘Whether you’re answering a phone in a call centre or making a piece of sculpture which is going to be exhibited in an art gallery, it’s creative,’ he says.  One of his famous neon pieces shouts the formula the whole world + the work = the whole world. Algebra was never my favourite subject, but if x+y=x then doesn’t y=0? it seems that Creed is daring us to believe that he believes that his work is worthless. When the work includes an A4 piece of paper ripped up and a piece of blue tac pressed on the wall, this is a very brave dare.

Creed then makes no great claims for his work, but other people think differently and he has been given a three-month retrospective at the Hayward Gallery until 27th April. When the man himself denies the artiness of what he does, what is an art gallery doing putting on such a  show? In the words of the title Creed has chosen for the show, What is the point of it?

The Hayward is filled with Creed’s minimalist works, from the main gallery spaces to the toilets (at least in the mens, I didn’t venture into the ladies to see what was there). Work also bursts out onto the balconies, where a car with ADHD, a video of a penis, and a brick wall give a good example of the very different subjects and materials with which Creed works. What’s he saying with most of them? I don’t think he knows. Most are the result not of hours of development but rather moments of It might be funny if I did this. Sometimes it is – sometimes it isn’t.

Each of Creed’s work is given a number, which takes away the chance for a thought-provoking title, but does save us from yet more pieces clearly titled untitled. Although the numbers are not random and do increase over time, Creed does not use number his pieces with perfect sequentiality. But as becomes clear from the pieces in the show, he does like a sequence.

Sometimes the curation takes away from the piece. Work no.100 from 1994 is explained as ‘On a tiled floor, in an awkward place, a cubic stack of tiles built on top of one of the existing tiles’. But the curators have surrounded it with Do Not Approach knee-high barriers, rendering it not awkward in the slightest. What could have been awkward is Work No. 115, A doorstop fixed to a floor to let the door only open 45 degrees. But it is installed on one side of a double door – it is easy to go through without noticing it or being impeded at all.

The best piece in the show is the much exhibited Half the air in a given space. An area of the gallery has been cordoned off and the amount of air inside it has been measured. Enough balloons have been filled with enough air to take up precisely (so we are told) half the air in the space. So far so ho-hum. But visitors are allowed to enter the space and wade through the balloons. The experience is unlike anything else – except of course the ubiquitous children’s ball pools – but adults aren’t allowed in those without either CRB checks or unpleasant repercussions. It is remarkable to walk astronaut-like through the white balloons, that are all around you, disorientating, passing through your legs, like being caught in a very low-mass avalanche in which you can still breathe.

The least rewarding works in the show are the paintings. Book editors know that cutting is vital. Here the curator seems to have taken everything Creed’s has created and stuck it on the wall, before going back to the artist and asking ‘Are you sure there’s not more?‘. The Hayward is a big space to fill. One fun piece of an opening and closing black curtain seems to be the world’s shortest play – the players the unsuspecting visitors out on the balcony. But like most of Creed’s works it is a one note, one hit piece that does not hold the attention.

The final work, placed in the exit to the shop selling Creed memorabilia, is a video of people vomiting. It is as though they have accidentally taken poison and are trying to get rid of it. One women is filmed defecating. Again Creed is tempting us to see his exhibition as rubbish, something that now we have seen needs to be purged. It’s not that bad, but it could have done with more editing. Creed was once told by a tutor at art school never to show anyone all your work. This was on the basis that if they didn’t like it you could always go away thinking well, they didn’t see it all. He should have heeded that advice – or maybe he did, and hidden somewhere in his studio are several works of brilliance.

Summary – some, but not many amusing moments.