Westminster Hall is the oldest building in Parliament, having been built in 1097 by William II. It survived the fire of 1834 which destroyed most of Parliament and its Romanesque integrity now appears more impressive than ever in comparison with the gaudy Gothic pastiche of the 19th century rebuild.

This huge stone hall has been the setting for many of British history’s biggest events. The trial of Charles I took place here, as did that of Guy Fawkes. Now though it is a cold thoroughfare that is hosting The beginnings of that Freedome, a collection of banners that celebrate milestones in Britain’s constitutional past, from Magna Carta onwards. 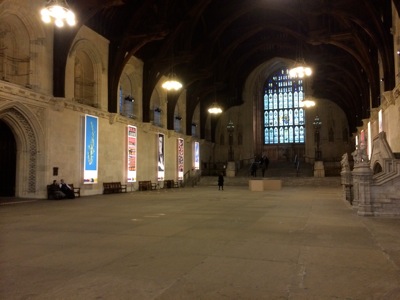 Nine artists have contributed to the show, each celebrating two of the chosen events, which include the 1601 Poor Law, 1832 Great Reform Act, the Tolpuddle Martyrs and the 1995 Disability Discrimination Act.

The works have all been enlarged and printed onto uniform banners. This takes away any nuance and gives an appearance of government-sponsored interior design. The individual images are mainly illustrative, often by artists chosen for political reasons. An image that works on a small-scale will not necessarily translate onto a larger canvas – and there are works here that do not really work even on a small scale. The space is basically a large entrance hall. The best works take this into account and function as billboards, simply shouting their messages into the huge space. Making one image to signify such important events must have been difficult, but most are not worthy of the momentous events they try to represent. 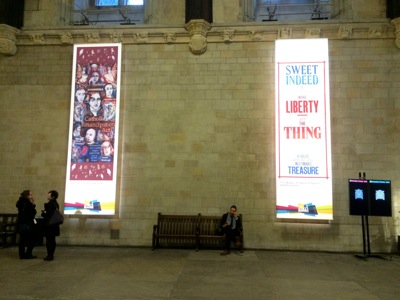 Given the airport security that has to be overcome to get into Parliament and the disappointing nature of the exhibition, if you want to see the works I suggest visiting the virtual gallery below. Unless you want to visit Westminster Hall, which is an architectural gem and makes the queuing/X-raying/frisking almost worthwhile.