And let you in on the deal* I went to see Patrick Wolf at one of his last shows in Germany in November 2011. The pre-act was a band called CHINAWOMAN and that was really almost enough to make me be late on purpose. But I was early (coming straight from work), stood in first row and the “woman” turned out to be mesmerizing from the very second she entered the stage. Dressed in casual black, with big jewelry and wild brown hair, she and a bandmate played the keyboard and guitars and filled the room with sexy, moody songs, entirely unexpected for most of the audience. Obviously we should stop judging bands by their names. And albums by their titles, as it is.

Here are some facts: Michelle Gurevich – a Canadian film maker and singer with Russian roots – started the project CHINAWOMAN in 2005 on MySpace and is producing a very unique Lo-Fi Pop ever since. She is releasing her self-recorded songs online and plays small gigs all around Eastern Europe. Influenced by Russian ballad singers of the 70s and 80s (a heritage of her upbringing in a Russian community in Toronto) she creates an experimental Art Pop centering around her melodramatic, low voice, accompanied by computer-made beats and other instruments she used to play herself.

The Debut Album “Party Girl” was released in 2007 –and do not be fooled by the title – all the songs are slow on purpose and almost dramatically heavy; talking of love, trust and women.  Even the Dance Mix of the single “Party Girl” hardly suits for a club.

Her fast growing fanbase in Russia, Poland, Croatia and Europe, was a total surprise to her, as they almost exclusively knew her from the internet, followed her MySpace-account and watched her self-made videos on her YouTube-channel.

In 2011 she was invited to go on a European tour with Patrick Wolf, where she presented a small collection of the songs from the album and left quite an impression. Once on stage, she stood at the keyboard, put on that lazy smile of hers and made her dramatic voice play with the lyrics. 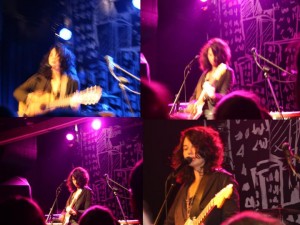 The album itself tends to get monotonous rather fast if listened to exclusively. The songs are both seductive and melancholic, but sometimes almost too sincere. Also, it doesn´t really do her onstage-appearance justice.

This unique, deep voice and its ability to create an extremely composed, intimate atmosphere, was reason enough, though, to give her second album a listen. “Show me the Face” was released in 2010 and is way more varied, energetic and still true to her own style. The evolution of CHINAWOMAN is obvious. The lyrics are more mature, but still playful at times.

Michelle moved to Berlin almost a year ago, to be closer to her Eastern European fanbase and more easily available for live gigs. With this she intends to bring the project CHINAWOMAN onto a new stage. At the moment she is working on the next album and stated, that she let go of all the material she had so far and is completely starting over new. It will be interesting to see, what the new creative environment will do to her art..

Now back for some facts:

She will be touring again in March/May 2012.