Charlie Chan Says: Bostonian hacks shine spotlight upon
Innocent kids not prayed for but preyed on

There are around 1500 priests in the Massachusetts state capital of Boston. According to psychotherapist and former man of the cloth Richard Sipe, who for the last thirty years has studied the sexual practices of the Roman Catholic clergy and in particular how sexual abuse has arisen from the Church’s requirement of celibacy, “6% act out sexually with minors”. Which equates to 90 priests. A figure which Cardinal Bernard Law (Len Cariou) would have us believe is “just a few bad apples”, but if you were to replicate that finding throughout the United States and beyond it is more like an overgrown orchard laden with putrid fruit. Or as Sipe more clinically puts it, a “recognised psychiatric phenomenon”. 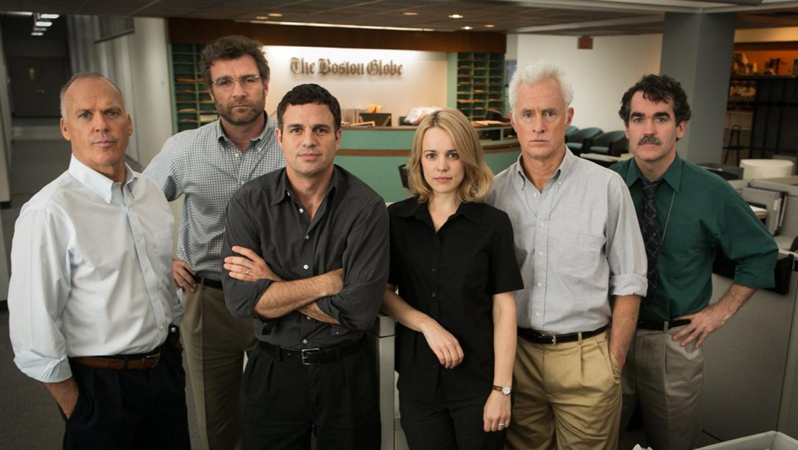 Their targets are often vulnerable young children from low income backgrounds and broken homes whose fathers are absent or dead. Like Joe Crowley (Michael Cyril Creighton) a young boy struggling to come to terms with his homosexuality who was forced to play strip poker with a predatory priest in order to make him feel more “comfortable” about his body. Or Patrick McSorley (Jimmy LeBlanc) who after his father had committed suicide and mother went “nuts” with paranoid schizophrenia was lured into the passenger seat of a clergyman’s car with the offer of ice cream where he was forced to engage in sexual acts against his will. Or Phil Savonia (Neal Huff), leader of the Survivor’s Network of those Abused by Priests (SNAP), who was “not prayed for, but preyed on” by his local priest. But, as Boston attorney Mitchell Garabedian (Stanley Tucci) says: “He’s one of the lucky ones: he’s still alive.”

The question which director Thomas McCarthy and his co-writer Josh Singer pose is: if the problem was so rife and so many people (from parishioners and lawyers to the media and the political establishment) knew, why was it allowed to happen? That’s where Spotlight come in: a quartet of investigative journalists at the Boston Globe daily newspaper headed by maverick “player/coach” Walter “Robby” Robinson (Michael Keaton) who together with hardworking hacks Michael Rezendes (Mark Ruffalo), Matt Carroll (Brian d’Arcy James) and Sacha Pfeiffer (Rachel McAdams) spend months trolling around for a story which would then take them a year or more to complete. That is until the arrival of their new editor Marty Baron (Liev Schreiber), a Jewish outsider with no interest in the state’s number one sport of baseball who is determined to turn around the flagging fortunes of the Globe and “make it essential to its readers”.

A laudable aim. However, bearing in mind that 53% of its subscriber base identify as Catholic, leading with a story about the systematic abuse of children and young adults by predatory priests and deacons is hardly going to increase readership. But run it he does. Because, as SNAP leader Phil Saviona says, it’s not just about a few bad apples in Boston: “It’s the whole country, the whole world. And it goes right up to the Vatican.” As the Spotlight team found out when at every step of their investigation they were met with constant denials and obfuscations from both the Catholic Church and their slippery legal representatives who through a campaign of fear and intimidation managed to secure a number of out-of-court settlements with “alleged” victims who for a capped fee of $20k were sworn to secrecy. But like a team of archaeologists, the deeper Spotlight dug the more skeletons they uncovered. And on January 6, 2002 the dirt was well and truly dished as they ran a story with the headline: “Church allowed abuse by priest for years.”

Spotlight has quite rightfully been nominated for six Academy Awards including Best Picture, Director and Original Screenplay as well as Best Supporting Actors for Mark Ruffalo and Rachel McAdams. The writing like the journalism on which it is based is top notch. As are the ensemble of actors, particularly Michael Keaton who struts and sulks like a boy frustrated his friends won’t play ball. “We’ve got two stories here,” he tells arrogant attorney Eric MacLeish (Billy Crudup). “We’ve got a story about degenerate clergy and we’ve got a story about a bunch of lawyers turning child abuse into a cottage industry. Now, which story do you want us to write?” And the cinematography, like the direction, recreates the unglorified day-to-day life of a newsroom to a tee. But one of the most moving aspects of the film are the closing credits which reel off a list of parish after parish, state after state and country after country in which church-sanctioned abuse has been committed. Proving, as Mitchell Garabedian warned, that “if it takes a village to raise a child, it takes a village to abuse one.”