Mention Israel-Palestine to most people and you probably won’t get the response, Oh, the other day I went to see a play about that. The conflict is one of the world’s most pressing issues, yet cats, opera phantoms and mousetraps are more popular subjects in British theatres. Even the anti-Orléanist Paris Uprising of 1832 has had more attention lavished upon it, although it’s been given the more user-friendly title Les Mis.

If you look hard enough though there are plays that engage with Middle Eastern politics and yesterday I went to see one of them at Battersea Arts Centre. On paper a production about the history of Israel and Palestine performed by a drag queen and a chorus of dancers doesn’t sound like a sure-fire success. Actually I’d go further – it sounds like the sort of play destined only to be watched by the playwright’s long-suffering mother and the cast’s press-ganged friends.

However in the wood-panelled council chamber at BAC Theatre Ad Infinitum have succeeded in creating an impressively physical examination of the story of Israel. The Israel-Palestine conflict is a topic fraught with elephant traps – I’ve probably fallen into two just there by mentioning Israel before Palestine and calling it a conflict. Maybe saying elephant traps is a faux pas as well. The sort of satirical debate that the Ballad of the Burning Star contains can be quickly kiboshed with shouts of anti-Semitism or anti-Palestinianism or anti-drag-queenism so Israeli-born writer and director Nir Paldi should be congratulated for bringing his own conflicting emotions about his nation to the stage. 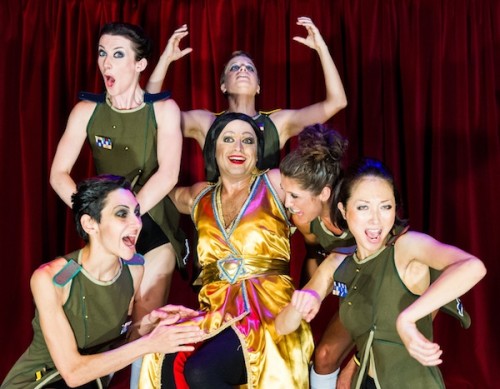 It’s a stage that is very stark. We could be in the sixty metre wide exclusion zone around the Israeli Security fence/Apartheid wall/West Bank Barrier, although there is one more drum kit than I noticed when I watched a documentary about the wall. The drums are played by Peter Aves, referred to as Camp David – who is busy all evening with his sticks and a variety of other instruments. He appears an unenthusiastic participant, and his playing of the music to which the actors dance contains a sly reference to the American finance that helps support the state of Israel.

Nir Paldi claims onstage, in one of his many asides to the audience, that he wanted someone else to play the hero. His search for an actor was unsuccessful though and so he took the dual role of Israel and drag queen Star himself. Dressed in clothes that I – maybe judgementally – regard as more traditionally worn by a lady he starts with a crash course in Hebrew before the rest of the cast join him on stage – where they stay for all but the last two minutes of the 80 minute show. For most of that time the five ‘Starlets’ are engaged in high-tempo singing and dancing, dressed in peculiar costumes that combine knee-high white socks and dictator-chic military tunics which open to reveal enormous black knickers. Elegant they are not – unless my ideas of elegance are spectacularly out-of-kilter with received opinion – instead suggesting the hybrid femininity of Israeli women, all of whom are forced to undertake military service. The Starlets are introduced individually but become a barely differentiated ensemble, treated badly and racially abused by Paldi’s embodiment of Israel.

The play opens with the sort of audience participation that drives any right-thinking Englishman to the bar, but for once it had a definite point. In the persona of Star, Paldi tried to racially profile the audience – but discovered that white, middle-class was pretty much it. Instead he beardily-profiled us, choosing an hirsute fellow to subject to a bomb search. It was a suggestion of the indignities forced on Palestinians everyday when they want to go to hospital, visit family or even just go to work. As a reward the audience member had a gold star stuck on his chest, a painful reminder of the yellow stars Jews were forced to wear in nazi Germany. Comparing the two is controversial stuff and Paldi is unafraid to critique Israel’s contemporary treatment of Palestinians, at one point his character coming out directly with the statement: ‘I don’t want to do to the Palestinians what was done to the Jews’.

The man who sits down and writes a play about Judaism, Palestine and Israel – narrated by a drag queen – is not a man who is courting popularity. Rare are the times when a producer has looked through a script and said to the writer, I like it, but what it really needs is a musical number about anti-Semitism. Once the subject matter was chosen Paldi was always going to be walking the finest of lines between pro-Israel and pro-Palestinian factions but he has managed to dance along the top of the eight metre high West Bank Barrier that divides them without falling off. That’s an impressive feat, especially whilst wearing golden heeled shoes and tights.  Much of the piece feels autobiographical but it has been inspired not just by Paldi’s own experiences but by testimonies given by soldiers of the Israel Defence Force to Breaking the Silence, an Israeli organisation that tells Israeli society painful truths about everyday life for Palestinians in the Occupied Territories.

Sometimes the relentless Israeli history becomes too much of a school lesson, albeit given by a somewhat eccentric teacher who would cause consternation at Parent’s Evening. Sometimes the loud music and deliberately accented impressions make it hard to understand what is being said, but Paldi’s central concerns seem clear. As an Israeli is he a victim or an aggressor? Should the terrible experiences of the Jews stifle debate? Does the history of Israel justify the measures that the state is imposing on Palestinians?

Political theatre has existed since the earliest Greek dramas and although it may not directly bring about change it can influence opinion and highlight issues, as demonstrated by the success of The Market Theatre in Johannesburg. Of course highlighting issues in Battersea is not the same as highlighting them in Tel Aviv and engaging directly with Israeli society. Paldi’s even-handed play has successfully transferred from the Edinburgh Fringe, but real success will be if this play can contribute to the dialogue by being performed in Israel.

And then who knows? In two hundred years maybe a musical about the conflict will be packing out West End theatres.

The Ballad of the Burning Star is on at the BAC until 8th March and then tours the country.