The English invented modern Democracy, Philosophy, University, and Theatre. We stole all four ideas from the Greeks. And English Theatre owes as much to that underrated art-form – the Socratic dialogue – as to ancient Greek plays. It’s the love-child, if you like, of Plato and Aristophanes. [And why not? Those ancient worthies went to the same orgies; and Plato loved men in ways that were anything but Platonic.] In other words plays can explore philosophy and bolster democracy, as well as reveal plots and develop characters. Ideas hit home when they’re wrapped in flesh and blood and put on stage. But all too often in political playwriting, the politics are one-sided and the characters one-dimensional. So it’s a huge relief to find that Dan Davies largely avoids these traps, with his clever zinger of play about the privatisation of universities. 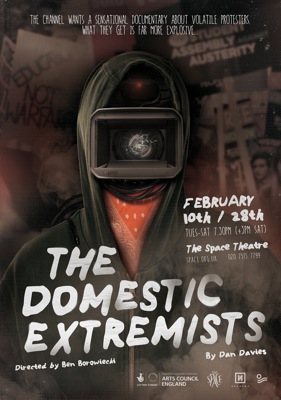 Chloe wants to make a documentary about university fees. She persuades Christopher, a once ground-breaking director, who now churns out cynical lifestyle shows with names like ‘Beautiful Bathrooms’ and ‘Whore by Choice’, to commission the film. But his boss Toby – a gleefully slimy Michael Roy Andrews – wants to turn it into a shock-doc about student anarchists. Chloe films both protest leader Roz and Government education minister Tabitha (both these and other parts played by the versatile Sadie Parsons). But as they make the film, Chloe and Christopher uncover a scandal of a police force out of control and a government corrupted by Business. The twists are unexpected and the tension is incendiary. [Indeed at one point the haze machine set off the fire alarm.] Nicola Dalziel and Jonathan Leinmuller skilfully portray Chloe and Christophers’ mirrored journeys from idealism to cynicism and cynicism to idealism. The politics don’t always convince but the characters do. This is a partisan exploration of a vital issue. But the writing is nuanced and the political point isn’t preachy. As Davies has Toby say in the play: ‘trust your characters – if it’s important it will come out’.

If David Hare was a cleverer writer his work would be like this. The difference is that a typical Hare play is less sophisticated than his audience thinks. Davies’s piece is more intelligent than some of his audience might realise. We were invited to stay on after the performance for a ‘dialogue’ with student protestors, middle class hippies and other assorted smellies. I ran away: I’d rather eat my own balls than endure a night of student politics. As Wilde said, the problem with socialism is that it takes up too many evenings. Or rather, there are better ways of spending your evenings. Like going to the theatre. And here a worthy mention for The Space: this neo-Romanesque church is a thrilling – for want of a better word – space. You’ll find it on the Isle of Dogs, nestled between the Mammon-scrapers of Canary Wharf and the council slums of Millwall. Like our universities, it’s partly reliant on public funding. But you still have to pay to get in. Even in ancient Greece you had to pay for higher education. Though back then, recognising its importance to democratic society, the State actually paid audiences to go to the theatre. Now there’s an idea worth protesting for.

by A N Donaldson