Kevin Morosky releases ‘Walking’ today, the third story from All Da Kings R Dead, which sees him explore the beautiful messiness of love and relationships through a year-long series of monthly online exhibitions.

“The fairies are too fat to fly, and bands now make them dance. The dragons are depressed. Happy endings are a myth. The lion burned down the wardrobe. Mr. P. Pan owes child support. Humpty Dumpty is suicidal, not clumsy. The castles are now flats, the moats are now sewers. The horses were sold to Tesco, and all da kings r dead.”

Each new show will go live through WWW.ALLDAKINGSRDEAD.COM on the last day of the month, with pictorials also available as free downloadable iBooks.

“I already had the intro text in my head, walking around with it for days and weeks, fitting it together until it was complete, only then did I type it out,” continues Morosky. “Still, it was missing something – a few days later the whole Tesco scandal broke and it seemed to just fit. Following that, I was having a conversation with the in-laws about tradition and honour, and how such things are gone, I heard those words, ‘All the kings are dead.’ I thought, ‘Yeah, that’s what it’s called. ALL DA KINGS R DEAD.’”

Even down to its colloquial abbreviation, ALL DA KINGS R DEAD is a space that connects several sides of society, all powered by one main theme – love. “No matter what my stories are about, whether it’s a black couple, gay couple, 3 way triangle couple, you get it because it’s about love,” he says. “It’s also a political statement, all governments are corrupt, it’s getting back to believing in good things, almost announcing a new beginning, which is something these times need.” 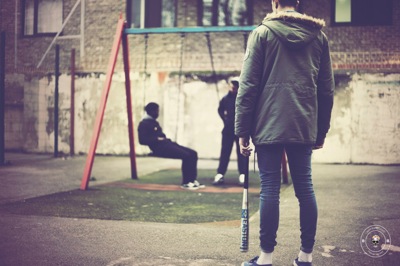 Walking: A lot of people talk about love, about soul mates, forever, wedding rings and standing by your man. They think the idea of Bonnie and Clyde sounds romantic, that Romeo and Juliet sounds nostalgic and whimsical… cute even. Personally, I think it sounds realistic, nothing special – just standard. Listen, wherever my baby goes, I go. Two tickets. Always. Love is not the lending of large sums of money, or meeting the parents, or friends’ approval. Love is not the 14th of February, shared baths, pet names, sides of beds or knowing his favourite colour. Love is ensuring that your fate is always one. It’s telling God to get out of your way, when the time comes to defend your love and wreaking such havoc that even the Devil himself feels surpassed. At its most basic, love is riding until the wheels fall off, and then continuing via walking.

Morosky has recently worked with MINI, PONY and their collaboration with Colette in Paris, Jessie Ware, Lianne La Havas and AlunaGeorge, and has had work featured in i-D, The Guardian, Dazed & Confused, Vice, NYLON, The Fader, Dummy, Time Out New York andMetro.