Wander off the chaotic streets between Green Park and Piccadilly, sidle down an alleyway next to a traditional London pub and you will be a little anxious that you’ve made a teensy mistake and it’s all about to go horribly wrong. However, exiting the alley you are confronted with a modern cube building in the centre of an old-style London courtyard. The White Cube gallery contrasts with its surroundings considerably, so much so that it could have landed from outer space. Its choice of encasement makes a bold statement, emphasising both its modern nature and concepts yet being a reminder that it too is part of history and London’s ever evolving landscape.

The white cube space was an original idea stemming from modernism. Its concept was a place free of context, where art could speak for itself. It is as it sounds – a white cube with artificial lighting and the White Cube Mason’s Yard is an example of this. However, like much architecture throughout history, it has become a place of importance itself and is part of an historical and contemporary context. The white cube doesn’t remove the context, it purely provides another. A different reading and perspective of the exhibited work is now gained.

One of my reasons for this brief summary was because Brazilian born, Christian Rosa exhibits his new abstract paintings within its walls. His work sits comfortably against the stark environment with its strip lighting – they ‘get’ each other. 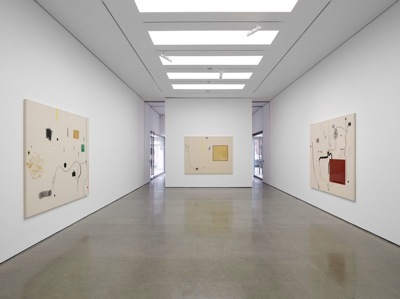 The White Cube has three rooms dedicated to Rosa’s art. Entering on the ground floor you pass a reception and enter a high ceilinged space housing four large, sparsely marked canvases – one on each wall. Although his work is referred to as painting, his use of paint is minimal in comparison to the size of the canvas.

Each canvas contains tornado like swirls, loose loops, lines and blobs. Rosa uses a variety of materials to create these marks including: paint, charcoal, pencil, oil, oil stick and resin. Rosa’s work is very textural and you get the sense he’s playing with the canvas, testing the materials and their response to the canvas itself. As you get closer to the work you discover detail: impasto paint and charcoal which has been whooshed across on its side revealing the quality of the canvas and its own material properties. In a single loop the variable qualities of charcoal can be admired and is manoeuvred to expose its range of thickness, its solidity and its blackness.

His sparse and minimal works ‘function like automatic writing’ White Cube. Yet, there is an undeniable structure to his compositions. One coloured dot is strategically placed to catch the eye, while a diagonal line moves us across the picture. The loops and marks draw us around the canvas but not in the traditional triangular compositional style. His placement of materials offer a sense of movement with his loops becoming the main players in the game. The use of minimal colours assist in this also. A limited palate sparsely scattered alongside black charcoal marks contributes to creating a sense of movement as the eye flits from pattern to colour on a never-ending rollercoaster.

Rosa also played with line and edging. Some shapes are carefully delineated with a precise black line and another will be marked out as but roughly coloured in the style of an eager five year old not quite attaining to the level of technical ability required for staying in the lines. This creates interest, movement and texture.

Room two spreads itself over the majority of the basement. Larger than the first it holds five paintings which are also larger to suit the room. Laid out similarly these works can be read as semi-abstract and push the boundaries of his exploration further. Rosa presents perspective in View from the Hillside with a gestural horizon line, water, a sun and some marks which could be seen as birds in the sky. In Flat n Depressed we see two quadrilaterals – one is black and is upright against the canvas the other a dull green and bisects it, giving the illusion of being laid flat as if it is jutting out towards us creating a surreal room. A bright white squiggle and red horizontal streak also provide depth and perspective.

By playing with colour and shapes in these two pieces, Rosa examines how we see; how a mark can be perceived as something other than just a mark on a canvas, offering us the chance to explore these ideas.

The last of the rooms, also in the basement, is tiny and exhibits ten small canvases in portrait, each containing fluid charcoal squiggles with two solid charcoal circles. Each also has its own personality depending on the movement of the charcoal and the placement of the circles. The one which varies in style is the final ‘portrait’ where the movement of the loops looked frenzied and the circles are no longer circles but rectangular slits. The series and its style implies a sequence and although it has a playful element by suggesting childish scribbles, the oppressive room and darkness of the work creates an unsettling emotion, especially when its culminating piece is of a feverish, slightly disturbing nature. On overhearing a conversation between two visitors viewing the works they seemed to agree, “That one there looks quite happy” then turning to the final piece, one of them says, “You don’t want to end up like that.”

Rosa’s art and the White Cube marry perfectly, so much so that this work looks as if it was made for the gallery. However, on further inspection you discover that this exhibition is not site specific. Their minimal style combines both a sense of reservation while slapping you in the face with its boldness. The White Cube is always worth visiting but with Rosa’s exhibition slotting in effortlessly you should definitely take some time to explore the gallery and slip down the side streets of London.