It’s interesting that George Clooney, one of the few Hollywood actors with no interest in having kids, has won so many awards for playing a father.

Most surprising is how well in fact he plays this role: for someone of his fame, being showered with praise in the media wasn’t enough to convince me he would really live up to all the hype.

The Descendants deals with some heavily somber themes, but throughout is often refreshingly light hearted. Traumatic accidents ending in death, grief, euthanasia, selling off natural land to developers and infidelity are all matters that protagonist Matt King has to deal with in a short space of time – apart from supporting his two young daughters through it all, who previously he only had to be ‘back-up parent’ to. This is perhaps where Clooney empathizes most strongly – with a parent that feels like a fish out of water, because they made the mistake of letting it all fall on their partner’s shoulders.

With that partner now in a coma, there’s no time to be broken in slowly – he just has to get in there and do the best he can.

Amara Miller and Shailene Woodley give very convincing performances as King’s children, Scottie and Alex, 10 and 17 years of age- a trying time for any young girl to see her mother go through such catastrophe.

The film has a calming Hawaiian soundtrack running through it. It reinforces the underlying theme of the story being intrinsically connected with Hawaii, as the place where King – and his ‘descendants’ – have lived and existed for generations. There’s a really strong sense of place, and how that defines the whole family and others that live there. It’s also inspiriting to actually see what this place is like for real, as somewhere that normal people live. As Matt King’s voice over bluntly puts it, “…our cancers are (just as) lethal.” There’s a non-glamorous side to Hawaii that outsiders almost never see.

The issue of King being sole trustee to local land worth billions, and a large extended family pressuring him to sell it off so they can profit, adds still more strain to everything life dumps on his plate. In the face of it all though, King maintains steady focus of what’s right and good- even if his opinions change on what right actually is, spurred on by some heavy emotional bombshells.

The Descendants is one of those films you’d think would depress you, but is quietly insightful and sweet. A comic performance from Nick Krause as Sid, and of course Clooney’s warm persona keep the overarching mood in an upward motion, if not quite jolly- but it’s certainly not downcast.

This is a touching film to warm your heart, with very little that induces cringing or eye rolling. It lives up to the plethora of awards it received. 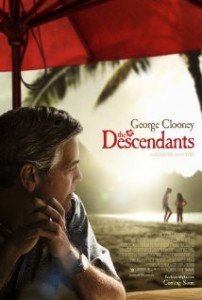