Starting on 8th April at the Simon Lee Gallery is the  solo exhibition of new and historical work by Japanese conceptual artist Keiji Uematsu, his first ever in the United Kingdom. Uematsu’s highly cohesive body of work spanning more than 45 years makes visible the invisible relationships between objects and the spaces they inhabit. Underlying his entire practice are the ideas of ‘de-familiarising’ space and focusing our attention on the natural forces of gravity, tension, and material attraction, whether through photography, drawing or sculptural installation. 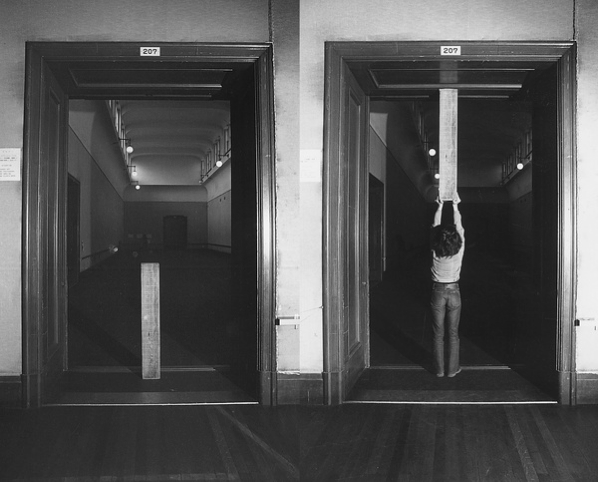 Uematsu graduated from the department of Fine Arts, Kobe University in 1969, at the very time when the new group of artists whose work later came to be associated with the name Mona – ha were rising to prominence. They proposed a radical conceptual practice which moved away from traditional forms of representation toward an engagement with materials, objects and their properties and it was in this creative context that Uematsu developed his artistic language.

In 1975 he moved from his native Japan to Dusseldorf. The following year he was the first Japanese artist ever to show at Moderna Museet, Stockholm, and he quickly exhibited his work in Europe and Japan. Dusseldorf proved fertile ground for Uematsu to develop his conceptual photographic practice and it was from within this context that he was encouraged to submit a proposal for the 1977 edition of Documenta.

Documenta 6 project drawing shows two timber beams held in tension across the width of a room, their alignment offset, the means of their lateral support evident. In this single drawing, the core of Uematsu’s project is apparent. It is, as he has said, ‘to create a work in which the lack of a single element will cause the entire structure, the invisible existences of things and their relationships, to collapse like a cosmos.’

This investigation of “invisible force” gives this exhibition its title and connects the sculpture, photographs and drawings exhibited, dated from 1973 to 2016. A series of three photographic diptychs from 1973, Board/Man/Rope, Vertical Position and Tree Man I depict the artist using his own body as a sculptural element and reflect his interest in performance and relations between body and object, object and nature and three dimensional space and its two dimensional representation.

In the left – hand image of Vertical Position a beam of wood stands upright in the doorway of what seems to be a municipal building – perhaps an art school. Its form echoes the shape of the opening and reaches from the floor to around 2/5 of the height of the doorframe. In the right – hand image, the artist supports the beam so that its top reaches the lintel of the doorway. His body and the sculpture become one; co – dependent. This doubling of the image encourages the viewer to contemplate the artist’s absence, and the force of gravity to which the beam is subject, of the effort of his muscles which hold it upwards. Those invisible forces are now made visible.

Board/Man/Rope follows the same structure. Here too the sequence of the images is counter – intuitive, the resting elements in the first left – hand image are given dynamism, the composition given meaning, only by the presence of the artist’s body and the forces it exerts in the second, and so the eye returns to the first and sees for the first time the invisible force at play.

A series of seven photographs Degree – light documents a performance Uematsu made for slide projecting in 1978 at the Performance Art Festiva l at Beursschouwburg (Brussels) . The performance consisted of the artist swinging a light bulb on its cord to describe a circle with his body framed at the centre. Using light to effectively draw in space, Uematsu creates an ephemeral form that appears solid for one brief moment, with the artist and object ‘becoming’ together. The circle, as a symbol of totality, wholeness, the self, the infinite was elegantly ruptured during the live performance, but here captured whole, photographically and exhibited for the first time.

These historical works, alongside new sculptures and large – scale drawings, all reflect Uematsu’s ongoing enquiry into making visible invisible forces whilst also making apparent the influence he has had on younger generations of artists internationally.