Earlier this year, I took part in Operation Pussy: a saucy codename for an otherwise mundane assignment – cat and flat-sitting for a friend in London. During my fortnight of moggy stroking and Mr Muscle spraying (or was it the other way around?), I queued for over an hour on the chilly South Bank to attend a studio recording of The Jonathan Ross Show which featured Grimsby star Sacha Baron Cohen. Mid-interview, we were shown a graphic clip in which (spoiler alert) Baron Cohen and his co-star Mark Strong seek refuge in the uterus of an elephant, as you do. Do not comment about this on social media, we were warned. Tell no one. Especially not The Comedy Police. Everyone did. Not long after the recording finished, Twitter was full of jokes about “the elephant in the womb”. And the desired effect of generating publicity to put bums on seats was achieved. My initial response was: here we go again, the same puerile, scatalogical, schoolboy smut from a man whose previous comedy creations such as Bruno ranked low on my titter-o-meter. How wrong I was! 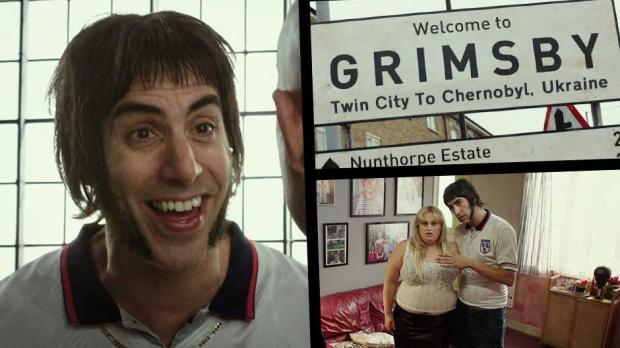 Strong plays MI6 Agent Sebastian Graves: grave by name, grave by nature. Baron Cohen, his older brother Nobby: knob by name… you get the gist! Separated from a young age when Seb was adopted by a well-to-do couple from the Home Counties unfamiliar with the concept of a 2-for-1 offer, Nobby was left to fend for himself in the grim-up-north streets of Grimsby which according to the local signage is twinned with Chernobyl. A diet of Carling and kebabs followed. And after fathering an 11-strong litter of sprogs with his “I’m not pregnant, I’m just fucking fat” partner (Rebel Wilson) – including Django Unchained and the follicaly-challenged Luke so-named because his bald head and emaciated frame make him look like he suffers from leukaemia – the life of Riley on Benefits Street beckons. That is until the “Butcher Brothers of Grimsby” are reunited twenty-eight years later when Nobby compromises an undercover operation headed by his brother Agent Graves who rather than planting a bullet in the back of a terrorist fires a wayward shot into the shoulder blade of a wheelchair-bound HIV-infected orphan whose blood is splattered into the ulcer-ridden mouth of Daniel Radcliffe. Think Harry Potter and the Deathly Swallow!

Thereafter, it’s a comical game of cat and mouse through the corporate skyscrapers of London and the red brick chimney breasts of Grimsby to the sandy deserts of South Africa and the lush green football pitch of the World Cup Final in South America as a “200016”-tattooed Nobby and a swollen-scrotumed Sebastian flee from the MI6 while at the same try to prevent a band of terrorists from decreasing the surplus population of low-income Eng-ger-land supporters by means of a poisonous fireworks display primed to go off after the full-time whistle. As you can imagine, subtlety and realism play second fiddle to OTT and fantasy. And though the jokes and slapstick routines appeal to the lowest common denominator (there are more cock, tit, fart and belch references than in a Beavis and Butt-Head box set), the plot is so tightly structured and the dialogue that meticulous that the conveyor belt of gag after gag after “tea-bagging gag” gag never becomes tiresome.

Yes, the boundaries of taste are pushed against a wall; but unlike Baron Cohen’s previous movies which suffered from taking a wacky idea and flogging it to death, in Grimsby the camera doesn’t linger as long and the pace is snappier than Usain Bolt with diarrhoea. So kudos to director Louis Leterrier (Now You See Me, Clash of the Titans) and his triumvirate of writers which includes Peter Baynham (Borat, Bruno) for reining in the anarchic imagination of Baron Cohen and yet leaving him just enough slack to unleash near-the-knuckle one-liners such as “I’m stiffer than a paedophile at Legoland”. Seeking refuge in an elephant’s uterus, accidentally shooting a wheelchair-bound orphan, infecting an ulcer-mouthed Harry Potter with HIV? I can accept. However, England winning the World Cup? To quote Victor Meldrew: I don’t believe it!