London – Scotland on the Scotrail Caledonian sleeper: One of the UK’s great journeys

Going to bed in London and waking up in Scotland?! It sounds like the stuff of science fiction but thanks to the Scotrail Caledonian sleeper it is a possibility available six nights of the week, Sunday to Friday. The sleeper train is the longest passenger train in the UK and leaves London Euston in the evening to wend its way to over forty locations in Scotland. Every night eight hundred beds are on the move across the country! The London to Scotland service has existed since 1873 and has always been a popular way to travel to the north of the UK. We took a weekday departure to Fort William on the West coast of Scotland. This is known as The Deer Stalker and leaves Euston at 21:15 to arrive the next morning just before 10:00am. It is one of the most exciting train journeys available in the UK and is highly recommended for anyone who loves travel. 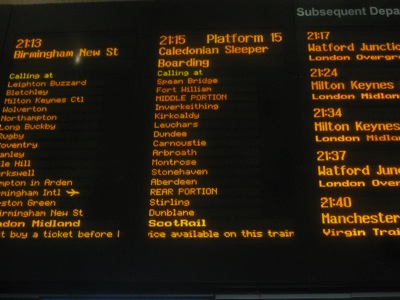 The Caledonian sleeper departs from  a platform at London Euston like normal trains – but it is unlike any other UK train journey. Stewards stand by each door of the very long sixteen-carriage train and direct you to the correct carriage. When you have reached your carriage another steward checks your name off and shows you to your cabin. We were travelling first class and were also asked what we would like for breakfast. Cooked or continental? Tea or coffee? You can even chose the time that breakfast is delivered to your cabin! 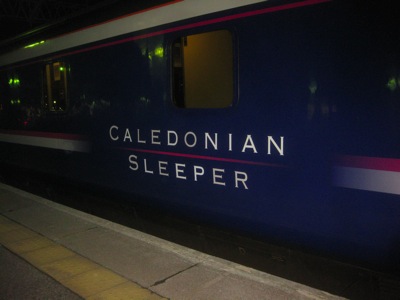 The carriages are laid out with a walk-way down one side and the cabins on the other. Inside your air-conditioned, non-smoking cabin you will find a bed laid out across the train, with a wash basin and shelf at the far end. A window gives you views of the journey but has a thick black-out blind so that you can sleep. Click here to see a 360 degree view of a typical cabin. Standard class cabins have two beds arranged as bunks. There is also a full length mirror and hangers for coats and jackets. With the world rushing by outside the cabins are cosy and exciting. First class passengers also receive a comfort kit which includes the world’s smallest and cutest tube of toothpaste, razor, toothbrush, towel, socks, soap, moisturiser and ear plugs.

Each pair of adjacent cabins has interconnecting doors, lockable from both sides. If you have booked both cabins and wish to use the interconnecting door then the steward will unlock it for you. Once we had settled in to our cabins, we wandered along the train to one of the lounge cars. Here you can get a drink and something to eat whilst seated in large comfortable seats. Some of the tables are for dining à deux and make a great place to watch London disappear as the train heads north. As well as food there is a good selection of single malts from all over Scotland on the whisky list, so whether you want something from Speyside, the Islands, the Highlands or Lowlands there should be a dram for you. Food is served all night. We enjoyed an earthy half bottle of Nero d’Avola from Sicily along with a chicken curry. Haggis was on the menu, but being uncertain what it actually was neither of us felt brave enough to take the plunge. That would come later in the trip. With real glass and proper cutlery, eating on the Caledonian Sleeper is a great experience. 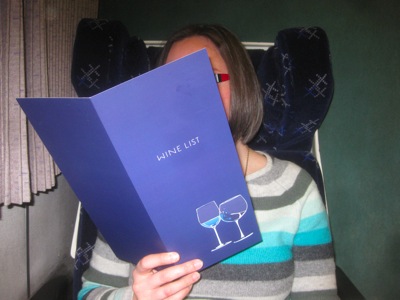 Back in our cabins the compartments were warm and we had controls to change the temperature up or down as we needed. The bed had white cotton sheets with a duvet and a blanket and though narrow was surprisingly comfortable. There is something romantic about sleeper train travel and going to sleep rocked by the movement of the train is an ideal start to a Scottish break away. 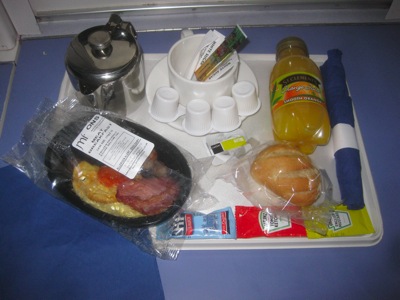 Breakfast was delivered at 8.00am. We both chose the cooked breakfast option and enjoyed scrambled egg and sausage, tomato and mushrooms as we had our first glimpses of the Scottish countryside and the snow on the tops of the mountains. There was some confusion in the morning as the train was going in the opposite direction and the lounge car had moved position. It seems that during the night, when some carriages head off to different destinations (Aberdeen, Inverness and Fort William) the train is reconfigured. It is great fun to have breakfast in bed on a moving train. Be careful though when getting dressed that the train hasn’t just pulled into a station! 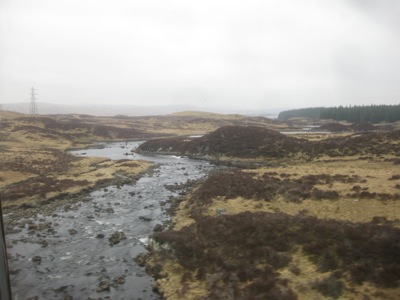 Taking the London to Scotland Sleeper train is one of the world’s great journeys and is an experience that everyone should try and enjoy at least once. It is relaxing and enjoyable, with no metal detectors or body searches and the time to enjoy a meal or a whisky before hitting the hay and waking up in Scotland. When you are travelling it is rare to arrive at your destination so early in the morning which makes it easy to continue your onward journey, or get straight into the holiday spirit. We were already in Oban by lunchtime and looking round a distillery before the end of the afternoon!

We travelled as guests of Scotrail. For more information and to book tickets click here.

1 Comment on London to Scotland by bed! The @Scotrail Caledonian Sleeper train