Look back in awe…

They’re not the kind of comedians that spring to mind when thinking ‘national treasure’ (although David Mitchell might well be on his way to becoming one) yet they have certainly acclaimed critical fame and a cult following during twelve years and nine seasons of Peep Show on Channel 4.

Peep Show has been the longest running and one of the most successful sitcoms on Channel 4, winning Baftas, British Comedy and Royal Television Society awards and the Rose d’Or for best European sitcom. 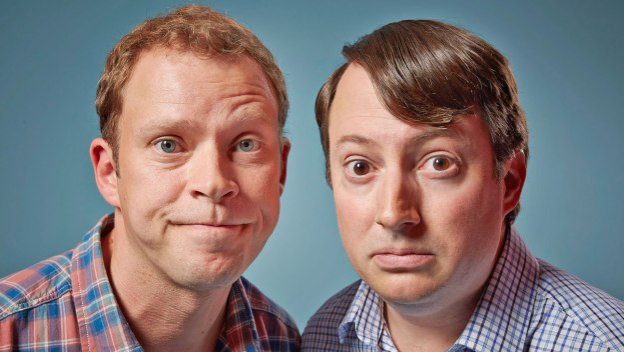 How did a comedy show that is as awkward as its protagonists, wiggle its way into the hearts and minds of a small but faithful TV audience and climb up to the dizzying heights of cult success? Well, I can only attempt to explain the phenomenon that is Peep Show but let me give it a try. First of all there is the initial pleasure of feeling utterly superior witnessing Mark Corrigan’s (David Mitchell) and Jeremy “Jez” Usborne’s (Robert Webb) hapless manoeuvring from one cringeworthy catastrophe after another until you realise you are starring into a mirror.

Let’s admit it – who hasn’t at some point in his life gnawed at a charred dog leg just to convince a woman you have got the hots for, that you are chewing turkey and not her beloved dog, who you have just accidentally run over with your car and barbecued afterwards? Who has never tried to electrocute a friend with a cow fence because he was about to lure the love of your life away? Surely we’ve all been doing the hanky-panky with a Gothic looking sixth-former just to make a female office colleague jealous, who is on a date with one of your arch enemies. Or have you never tried to woo an attractive neighbour with a rendition of Antony Beevor’s Stalingrad?

Well, we’ve all been there and done it (in one way or another) and that’s why we love Mark, Jez and Super Hans. We love the Peep Show cast with the same passion we love Sisyphus. Because like the ancient Greek king the Peep Show gang pushed the rock up the hill over and over only to see it plunging down and crushing all their hopes and dreams again and again.

And we wallow in Schadenfreude (as well as roaring, belly-aching laughter) as we observe the utterly hopeless protagonists of Peep Show crawling within an inch of that alluring wonderland of happiness only to have it snatched away in the most cruel and embarrassing manner. Sounds familiar?

When Peep Show first started in 2003 it was radically different to any other comedy show – it was sharper, funnier and far more cringeworthy than most sitcoms and ventured into areas way beyond what common decency would deem appropriate. Sure enough the main plot line – two graduates in their twenties living in a ex-council house flat in Croydon – doesn’t sound like much of a revolution in terms of comedic value (as opposed to let’s say three generations of mad Catholic Irish priests shacked up with an über-eccentric house keeper on a remote island). What made Peep Show different and exciting was the camerawork (the show was filmed from the point of view of one of the characters) as well as the interior monologue of the protagonists being broadcast in voice over. Obviously there is a chasm between what we think and say out loud but seldom has this been exploited for comedy purposes. These characteristics made the show somewhat uncomfortable to watch so it was never destined for mainstream audiences. Yet it stayed with us for nine seasons, which is by any measure a great success.

But was Peep Show eventually a sell out like so many great TV shows? Did it fizzle out into obscurity after the second season or did it keep audiences on their feet? The answer is a resounding yo (meaning yes and no….)

Super Hans getting married. Jeff having gay sex. Mark doing it in the toilet – the last season was not Peep Show as we knew it. The producers obviously tried to go out with a bang and venture beyond roads well travelled. Unfortunately it did become a little too shallow in the end, a little to conventional, a little too mainstream, a little too silly…. but all is forgiven in the light of the blast that were the previous eight seasons.

Watch Peepshow on All4