Horace Walpole was the poster boy for Gothic Revival, although technically his poster was more of an oil painting by Joshua Reynolds. Son of the first English prime minister, he had time and money on his hands and an imagination in his head – combining all three led to the creation of the gothic extravaganza Strawberry Hill House. Going against the contemporary fashion for neo-classical villas, Walpole extended an existing 17th century house into a unique residence that was already popular with sight-seers during his lifetime. 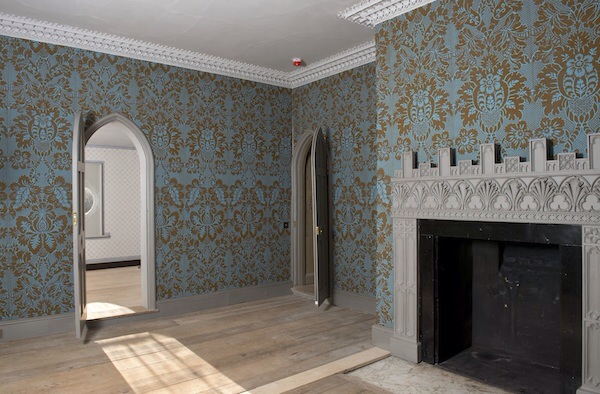 It is a theatrical house, each room decorated in a different, bold design with decisive colour schemes. Paint it all magnolia was not a phrase that ever passed Horace’s lips. Since 2010 parts of this eccentric villa in Twickenham have been open to the public but now five of his private rooms have also been restored and put on display for the first time since the 18th century. These include his bedchamber and dressing room and the Green Closet, where he wrote many of his famous letters. These rooms are not as outrageously gothic as the façade and the more public rooms.

Strawberry Hill is one of the best documented houses in England, with Walpole himself writing a detailed description and many illustrations surviving that show the original decor. Much research has gone into the restoration. Original colours have been recreated, including for the Holbein room an ecclesiastical purple which includes insects in its ingredients and is laboriously created over 15 days of risotto-like stirring. Traditional craftsmen and techniques have recreated the original wallpapers – found under years of accretions and at the back of cupboards. Volunteers are investing huge amounts of time in sewing replicas of fabrics that were once in the house, including a large bed spread which is progressing at the rate of 6 inches a week. 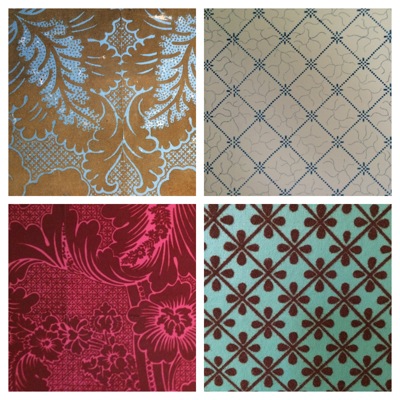 Examples of the luxurious wall papers at Strawberry Hill

There is a sad feel to the house. By 1842 the owners’ of the house were heavily in debt and a large sale saw most of the contents sold off. Today there is a sense of emptiness, as though someone has just moved in and hasn’t yet had much furniture delivered. Niches are empty, walls are no longer covered with paintings. Recreated, replica, facsimile, copies are all words used at Strawberry Hill regarding the decorations. But then Walpole himself wasn’t averse to copying, taking a ceiling design from an abbey here, the design for a chimney-piece from a tomb there.  He even passed off items in his collection as older than they were, claiming his Civil War armour was medieval.

Michael Snodin, chairman of the Strawberry Hill Trust has said that Walpole ‘created a form of thematised historical display which prefigured modern museums’. It is a shame that so little of his collection remains in situ although in 2017 a large exhibition will see Strawberry Hill temporarily hosting many of the items that were sold off in 1842.

The restoration has removed more recent alterations but still shows the changing foibles of fashion (flock wallpaper, anyone?). Renaissance stained glass remains at the top of many windows, shielding the eyes from the sun and lowering the gaze towards the river. Except that nowadays you can see not the majesty of the Thames, but a flood-barrier of smaller houses. We can though imagine what Walpole would have seen from his various chambers, and experience life in a mini Gothic castle. Quirky and worth a visit, if only to see how not to instruct the architects doing your extension.