The Beijing Olympic Stadium will provide the backdrop for the FORMULA E championship opener and world’s first fully-electric single-seater race.

Taking place on Saturday, 13th September 2014, the inaugural Formula E race has been set around the grounds of China’s iconic Olympic Stadium, known as the ‘Bird’s Nest’ and venue for the 2008 Olympic Games. At 3.44km in length and featuring 20 turns, the anti-clockwise temporary circuit has been custom made by designer Rodrigo Nunes. 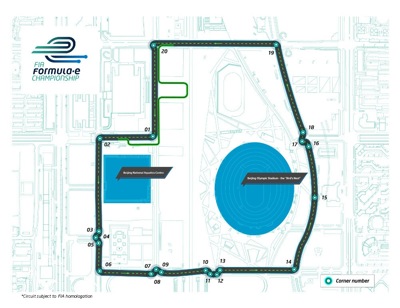 The full circuit for the Beijing Formula E Grand Prix.

The circuit boasts an impressive cityscape backdrop taking in both the Beijing National Aquatics Centre and the Olympic Stadium itself. It will see the 20 Formula E drivers tackle a mix of tight left-hand turns – offering late braking and overtaking opportunities – together with twisty chicanes and two main straights.

In addition, the track features a unique ‘U-shaped’ pit lane with spectator areas located inside giving fans an incredible close-up view of the action.

Formula E is a new FIA Championship using fully-electric single-seater race cars capable of speeds in excess of 225km/h. Ten teams, each with two drivers, will go head-to-head to create a unique and exciting racing series designed to appeal to a new generation of motorsport fans, whilst accelerating the electric vehicle market and promoting sustainability.

The Beijing Formula E GP circuit is the first of 10 city-centre races on the inaugural 2014/2015 Formula E calendar.