People often have the opinion that commercial art galleries are intimidating. This is a strange reputation for any business to allow to develop as they couldn’t exist with chaps and chapesses going in and buying stuff. Nevertheless the image, even if mostly undeserved, remains. Noticing this, in 1999 Will Ramsey founded the Affordable Art Fair to welcome everyone and try to dispel the notion that you have to be mega-rich to buy art.

Billed as the ‘Friendly face of art’ – although the other art fairs I’ve been to haven’t been unfriendly – for the fifteenth year the Affordable Art Fair is bringing art priced from £40 to £4000 to Battersea Park. With a less London-focused group of galleries than many fairs it is a chance to see contemporary art from around the country. There is a broad range of work on display, from purely decorative work for that empty space above the fireplace to more conceptual pieces for collectors trying to spot the stars of the future. 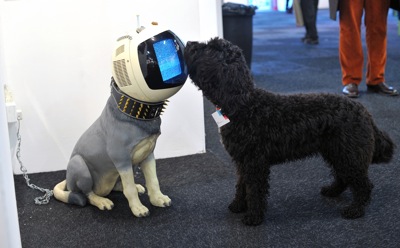 The first section of the show is the Project Space, where more galleries such as BearSpace showcase artistic innovations and more experimental work. Kinetica Museum is showing a live automated drawing by Baling Bolygo, or rather by the Trace Drawing machine designed by Balint Bolygo. This creates topological drawings from models of human heads and is worth seeking out. However they are also showing Xylophone Wheel by Alexander Berchert.

This is the sort of piece that is cleverly realised and makes what appears to be a delightful plinkity-plonk. The next time you see it you think very good, now turn it off. The third time you start wondering where the plug is. Or maybe that’s just me.

Inside the main fair is a strong buzz of gallerists, public and soft pop music, all under a purple LED dotted ceiling. With over 100 exhibitors there are hundred of different artists and styles to look at and examine. The carved pieces of clothing by Alasdair Thompson in the same Carrara marble as used by Michelangelo are well-presented by The Art Movement and deserve a look.

Today, Friday 14th the fair is celebrating women in art with fashion house Gudrun Sjoden. Visitors will be able to view the new collection and try creating a silk scarf with help from artist Tessa Spanton. At the weekend Artyard will be demonstrating different techniques to create bugs and insects. These events show that the AAF occupies a different place to other London art fairs. There is more emphasis on creation by hand, less on highly conceptual pieces. This must be something that visitors like – last year’s Autumn fair in Battersea saw 22,000 visitors and sales of over £5 million. That sum might not get you much more than the frame of a Van Gogh, but £5m is a lot of young artists selling a lot of relatively affordable art. 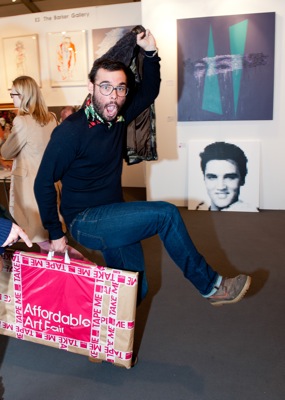 Throughout the fair, the South London Art Map is arranging tours of the Fair, picking out favourite pieces and bringing gallerists out from behind their desks to talk about the work on show. Having experienced one I can recommend their actual South London tours, but the advantage of this was there was much less walking. George Major led us around the fair and we met artists, art dealers and learned something of their work and areas of interest, from Vietnamese work (Raquelle Azran) to Inuit art (Ken Mantel). I now know which side of Canada has hard rock, and which has soft rock, and why that affects the work produced in the country. Or at least I would if I could read my notes.

It is hard not to take sight for granted, but helping us not to do that is Fight for sight , this year’s charity partner of the fair. A special opening night event helped raise money to fund pioneering research into preventing sight loss and treating eye disease. Their stand has several copies of Vermeer’s Milkmaid, all with varying amounts of the image either blurry or completely black. These pictures demonstrate how different diseases affect eyesight. A good choice for a charity at an art fair where almost everything depends on sight. Except that xylophone wheel…

The Affordable Art Fair is on in Battersea Park until 16th March.

More details and to buy tickets