Fetishism is fixation, and for a filmmaker that can prove to be a limitation.

Much has been written about director Todd Haynes’ affinity for films of the 1950s—and particularly about his affinity for that decade’s most emblematic filmmaker of florid melodramas, Douglas Sirk (Magnificent Obsession, All That Heaven Allows, Written On The Wind, Imitation of Life). Haynes himself, in frequent interviews, has discussed at length his passionate regard for Sirk, and in 2002 he directed Julianne Moore in Far from Heaven, which was a loose adaptation of Sirk’s All That Heaven Allows (with Jane Wyman and Rock Hudson).

Haynes is not alone in his admiration of these lush, gutsy soaps: most knowledgeable film buffs and a solid majority of critics relish their cinematic energy and prescient probings of the era’s social hypocrisies. He also demonstrated his rapt tropism toward period pieces with his take on the world of 1970s glam-rock (The Velvet Goldmine, 1998) and in his fine direction of HBO’s five-part miniseries remake of Mildred Pierce, with Kate Winslet, in 2011. With Carol, his new ‘50s homage featuring Cate Blanchett and Rooney Mara, Haynes may have gone about as far as he can go with his Sirkian obsession. 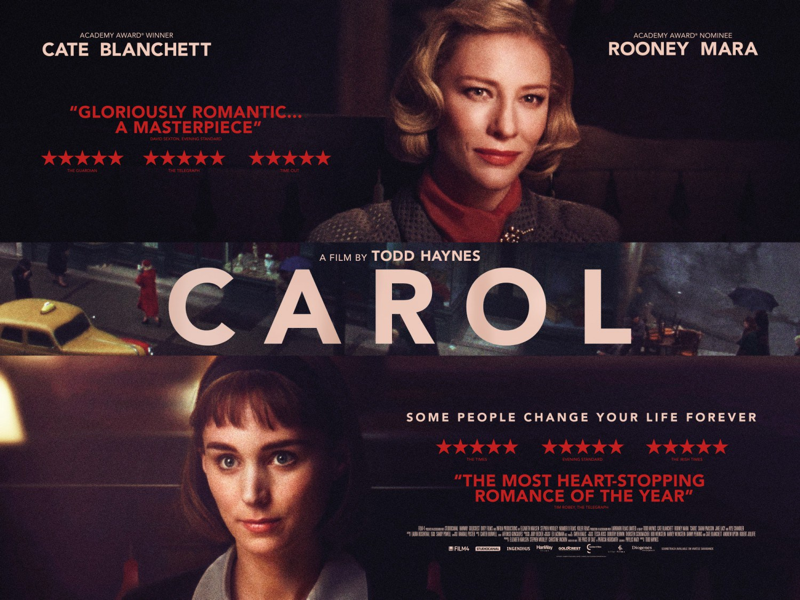 Adapted by Phyllis Nagy from Patricia Highsmith’s 1952 novel The Price of Salt, the film is set in 1952-53 and tells the story of two women who fall in love with one another against a scrupulously evoked backdrop of pop hits by Eddie Fisher, Billie Holiday, and Jo Stafford, ladies having tea at The Ritz in hats and gloves, svelte Packards nosing through midtown Manhattan traffic, and news of Ike’s first election airing on small television screens. Judy Becker’s production design and Jesse Rosenthal’s art direction give Carol an appropriate glossiness, and Edward Lachman—who was Haynes’ cinematographer on both Far From Heaven and Mildred Pierce—once again serves with deliberate adoration as acolyte to Haynes’ vision. The team’s entire mise-en-scene—the use of proscenium-like framing, faces seen through rain-dropped windows, the saturated color palette of aquas, coral, olive, and rich browns shading into chiaroscuro—is so expert in its meta-evocation of the era’s cinema that some viewers may actually feel that they are watching a 1950s film within a 1950s film.

The film’s greatest attribute is its seamless pictorial authenticity. Its problem is that it has a curiously sluggish and airless quality and only infrequently comes to full-bodied life.

Blanchett plays the title character, a well-to-do Connecticut woman who is divorcing her husband of 10 years and grappling with him over the custody of their young daughter. She meets Terese (Mara) a department store clerk and budding photographer and—tentatively at first and in the face of fiercely prevailing social mores—they embark on a relationship. (With early awards-season buzz, and the film-opening clout of the great Blanchett, the cast and creative team wisely adhered to the social-issue line in interviews but, sadly, even on that front CAROL fails to satisfy. The love story-against-societal-odds that should propel the narrative and draw the viewer into the women’s sense of discovery is lost in the self-conscious period correctness.) Ironically, Carol suffers from Haynes’ and his team’s hyper-attentiveness to visual detail. Every peripheral action, physical setting, costume design (perfect, by Sandy Powell), every appliance, canned good, radio dial, cigarette lighter, and watch face receives the same lingering, reverential gaze, and is given equal value to the dramatic development—and too often that creates a sense of narrative inertia and, even for such fine actors, a diminution of opportunities for characterization. As usual Blanchett is glamorous and more than capable of holding our attention with her watchful, inward stillness, and Mara countervails with an alert earnestness. Carol’s and Terese’s exploration, however, feels rather stifled—and it has less to do with our being able to feel the social strictures that confound them and more to do with the director’s heavy indications and prescriptive style. A certain muted delicacy might be argued as appropriate for both the era and the material, but when the care and mastery in evoking a period outweighs the drama, our appreciation is left too frequently to dwell on contextual detail rather than the human focus.

There can be no doubt that Haynes demonstrates an acute sense of texture and tone, but since he has so frequently drawn other comparisons with his and Sirk’s films it’s difficult for us not to do the same. The dire trials of the female protagonists in Sirk’s melodramas may be nearly over-the-top, but they are full-blooded sagas that viewers can sink their teeth into. Even more, their narrative insistence and Technicolor vibrancy sink their teeth into the viewer—and don’t let go. His movies have a subversive power, seething up like lava beneath the suppressive order of ‘50s society and bursting from the screen. Even with their sometimes overripe high-voltage garishness (which consigned them largely to the camp category for 20-30 years) Sirk’s melodramas are undeniably watchable. Carol lacks this emotional immediacy: though Blanchett and Mara have a few subtly moving scenes, much of the film remains flat, static, and distant. A few ravishing images may resonate, but the viewer too often is stranded at a remove.

Haynes is an intelligent filmmaker. His passionate regard for film history as well as for source material and craft are more worthy than much of the sophomoric slapdash that unmemorably fills cineplex screens. We can have every reason to hope that, now fifty-five, he may yet move beyond this tendency to rather impenetrable self-involvement and make a more robust, involving, and invigorating film, one proving that even his Mannerist art can give us more than a pastiche of painstakingly curated images and take on—as Douglas Sirk himself might have titled a piece—a life of its own.