Tomato salad Straight from the Balkans

OK this is for me a standard side order when I am traveling through the Balkans in the summer. It is the perfect accompaniment to grilled meat and fish dishes helped along with a few rocks of bread. On the plane somewhere over the Alps I think of my first meal and it’s usually cevapici, a tomato salad, and half a litre of draught beer.

I couldn’t understand why the tomato salads in the Balkans were so much better than the tomato salads I made at home, where I mucked around with red onions, shallots, olives, and mozzarella, basil, red wine and balsamic vinegar. I asked the waiter what was in the dressing. He looked confused. There was no dressing, just a little oil. No vinegar — that was the simple secret. My mind tricked me into thinking there was vinegar in the dressing because I always used vinegar in salad dressing. I mean without vinegar, it’s not a dressing is it, it’s just oil? The illusion that there was vinegar in this ‘salata od paradijz’  was also supported by the fact that the tomatoes in the Balkans tasted of tomato, offering  sharp and sour notes, unlike some of the supermarket varieties of the species back home which offered the taste of — sour water?  These were socialist tomatoes they had not been tainted by the capitalist drive to the bottom where mass produced cheap tomatoes that tasted of anything but tomato decorated our supermarkets. Balkan tomatoes just need olive oil as a little compliment — an applause — to the natural goodness of the tomato, and as a softener to the kick of the onion island in the centre of the tomatoes. 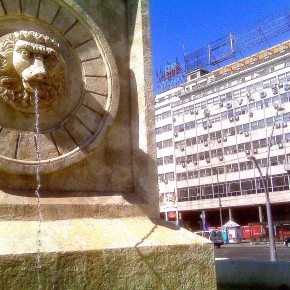 So try and get the best tomatoes you can find. If you’re not up for going to Borough Market, your local supermarket should provide you with quality beef tomatoes or failing that, use medium sized on the vine tomatoes—organic if you can afford it. Don’t go messing around with cherry tomatoes, far too sweet and intense, they don’t dance well with a good piece of grilled meat or fish. Keep your tomatoes big and sliced.

Thinly slice tomatoes into wheels and decorate serving plate. Make an island of chopped white onions in the centre of the plate—preferably Spanish sweet and mild onions—red onions will do. Drizzle with a mild olive oil, the mildest you can find. Finally, sprinkle with a good sea salt. That’s it. Trust me, it will be the best tomato salad you have ever had.  If you’re suffering from withdrawal symptoms due to the lack of fuss and ingredients one grind of black pepper per serving might make you feel better.

Note—if you are generous with the olive oil you’ll be left with delicious salty liquor after you have eaten your tomatoes that you can dip rocks of bread into.