Given how much I loved The Flying Dutchman I was expecting great things from NI Opera’s Macbeth.

It had many virtues which I absolutely loved.

The American Horror Story style witches straight out of a Victorian lunatic asylum were excellent and their movement was suitably creepy to ensure some audience members visibly recoiled when they first came on stage.

A stunning backdrop with a striking image by Alan McMahon which nodded to the iconic visual of Cosette from Les Miserables and which I would quite like on my bedroom wall.

The set was beautiful and though stark and cold for the scenes with the witches, was soon warmed up with banqueting tables, banners and flaming torches for the scenes in Macbeth’s castle. The raked stage worked well to ensure a feeling of claustrophobia, though I felt that this effect was lost a little by the performances. 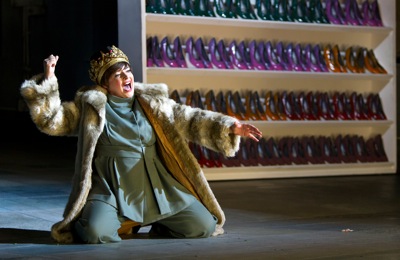 Lady Macbeth’s shelves of shoes made lots of the female audience members jealous but was a well placed reference to her determination to rise to the top and look good doing it. A press photographer taking photos at important moments in the Macbeth’s lives pointed to the modern day cult of celebrity and I thought this was a nice touch.

A large curtain with images of the village people who had gone missing was poignant and sad and very much reminded me of the notice boards of missing people which spring up during a natural disaster or civil war.

I loved the gang of hoods with their covered faces and hard man stances. They very much reminded me of Belfast’s own spides or indeed Tartans.

While all these elements by themselves worked well and were striking, I felt that perhaps there were too many styles for the audience to take in. The darkness of the story and the sense of foreboding which should have been present was not visible as the audience tried to keep up with the varying themes.

I felt that the performers lacked any real belief in the story they were telling and I made little connection with most of the characters with the exception of MacDuff. Andrew Rees has an engaging personal acting style and I really felt his words as he sang about his children being killed by the tyrant Macbeth. It seemed that Lady Macbeth was played for laughs rather than being the conniving and reckless bitch I wanted her to be.

If I’m being honest a few simple things really annoyed me about the production which should have been easily fixed. A screen provided on the stage to show the horrors that Macbeth had committed was much too small for anyone to see and given the amount of room on the stage, could have been better used. Having a stage crew member carry said screen off mid-scene in full light completely broke my sense of disbelief and it seemed like this had been thrown in at the last minute. While having crew on stage is acceptable for small theatre shows, I feel for a production which is so focused on slick scenes and expensive sets, this was an oversight which should not have happened.

Overall, I did enjoy the show. The Ulster Orchestra as always, were amazing and I always enjoy the visual spectacle of opera but I wanted to be shocked and angry at the Macbeth’s behaviour, instead I was amused.