Elongated backs, moonish buttocks and blank spaces of the backs of heads greet me at this exhibition. Arranged as though reflections on opposite walls of the gallery, these are the 18 portraits of Dawit Abebe’s “Background 2”. Men, women, old and young are stripped down, facing the wall absorbed in an obstinate stare. Automatons with their features denied. They are caught in an obedient response to the orders from some unknown all-watching, all knowing Orwellian Big Brother, who remains hidden in the peripheries of the canvas. Abebe investigates the impact that technology has on human behaviour, sapping humanity as we know it. 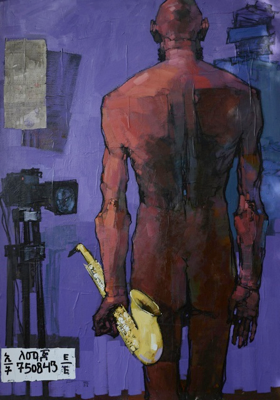 The exhibition begins with full body portraits and leads to close ups, a security camera zooming in. Unnervingly the viewer becomes this security camera and its zoom, looking closer and closer for human flaws.

The physical action of walking inside the gallery feels like you are closing the gap between yourself and the work, but at the end of the exhibition I felt more alienated. Is this representing the harsh construct of technology disabling your ability to engage, a coded cyber barrier between yourself and reality? Or is Abebe giving a nod to the complexity of identity, it cannot simply be zoomed in on, it leaves you guessing.

Intriguingly the exhibition becomes an act of defiance. Each portrait dismissing the viewer, their subjects deliberately irritating by refusing to turn around? It is a realization of the body politic, individually confusing and lacking power but as a collective standing firm.

One holds an apple, another a gun, another a flower. But all are held limply and loosely with no conviction, as if placed in their grasp rather than taken with impulse and yearning. These objects act as clues to the identities of these subjects in reference to classical portraiture. This is like social media where identity is external and can be picked, chosen and played with. Each holds a licence plate, represented by a number, the only way of recording them as interaction becomes faceless.

Yet individualism is not abandoned. Crimson, purple, black, mahogany, dusky orange colours of blood, flesh, root, earth and sun combine to make a landscape of shoulder blades. Broad backs turn into the rolling hills and vast, sandy plains of Africa, identities created from the very clay of their country. A technique that Abebe has used is to texture the backs of his subjects with layers of paper torn from old primary school exercise books on history, science and geography, if it is so with these portraits their backs are burdened with history. Dented, singed, bruised, time lays its signature on them.

Abebe represents the deceit of our world’s technology. Nothing is for certain in cyber space, identity can be chosen, corrupted, it has no root. But for this artist history and humanity cannot be wiped clean, will not be estranged from contemporary life and the hyper-reality of the technological realm. It will root itself, dig in deep, and not become adrift.

In its final days I urge you to go and see this exhibition, in my opinion it is a triumph against technological tyranny. But of course, you must decide for yourself.

“Background 2” by Dawit Abebe at The Kristin Hjellegjerde Gallery closes 2nd May.