If you missed Clouds of Sils Maria when it was released in April of 2014, it may be just what you need for a bracing holiday—and not only because the film’s locations primarily include a cozy chalet and the mountains, forested valleys, and high meadow vistas of the Alps in southeastern Switzerland. Lead actors Juliet Bincohe and Kristen Stewart give invigoratingly intelligent performances, and Olivier Assayas directs his own screenplay with shrewd grace. Assayas’ 2008 film, Summer Hours, won the New York, Boston, Vancouver, Los Angeles, and National Society of Film Critics Awards for Best Foreign Language Film. Among other works he also directed 1996’s Irma Vep. Clouds of Sils Maria is his best work to date—psychologically engaging and emotionally affecting, it unfolds with the uncanny logic of a dream, like some familiar truth, and yet we never know at any step of the way what will happen next. 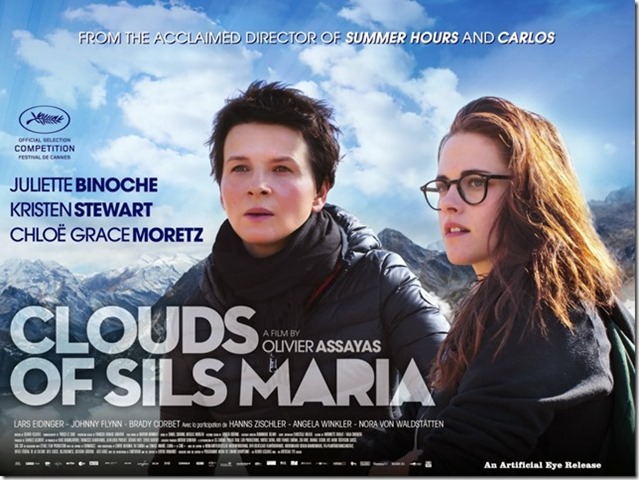 The film picks up with Maria Enders (Binoche), a celebrated screen and stage actor, on a train to Zurich to deliver a tribute to a playwright named Wilhelm Melchior. Accompanied by a canny personal assistant, Valentine (Stewart), they receive news enroute that Melchior has died. The tribute goes ahead, and afterward the two women meet with his widow at her house in the Swiss mountains. Years before, Melchior wrote a play, “Maloja Snake,” about a female corporate boss who has an affair with a young woman in her office—originally played by Maria. Now she has been asked to revisit the work, on the London stage, in the role of the older woman. And so—staying at the Melchior chalet while the widow is away—Maria runs lines with Valentine reading Maria’s former part in Melchior’s home.

The viewer is invited to explore the indistinct and porous borders of art and life—and the unique artfulness of those actors who live even closer to those fault lines than others of their peers—but Assayas, Bincohe, and Stewart refrain from allowing the “meta” framing to become precious, archly intrusive, or self-conscious. The viewer is pleasurably seduced into a mystery that is heady, unpredictable, slightly disorienting, and provocative. Clouds of Sils Maria is both rich and fresh, and even an unresolved development near the end proves to be neither careless nor contrived but stimulating and, in retrospect, expansive.

As Maria confronts her insecurities about playing the older character in the play—and eventually meets the young Hollywood celebrity (Chloe Grace Moretz) who will take her former, career-making role as the manipulative 20-something seductress—the interplay between life and art burgeons with more force in Maria and Val’s relationship. As they take long hikes and bathe in alpine tarns, we are drawn even more deeply into the film by the necessity of trying to discern line rehearsals from personal exchanges. Binoche (who appeared onstage in London earlier this year in “Antigone”) gives one of her most raw-boned and arresting screen performances to date, and Stewart meets her more than halfway—she need not worry about her career lingering in the penumbra of Twilight. (Both won France’s Cesar Awards for their performances last year, as did Assayas for his screenplay.)

The house and its pristine yet ethereal setting offer the film’s meditations an added redolence. Now a museum and study center, it was home to Friedrich Nietzsche during several productive summers. He wrote of it, “Here one can live well, in this strong, bright atmosphere, here where nature is amazingly mild and solemn and mysterious all at once”. Assayas powerfully evokes this atmosphere for his film. Here is the true high life, one that calls into question the model in which Maria and her kind—and not only in the movie business—are so often consumed.

Not only does Clouds of Sils Maria invite repeat viewings, I anticipate that it will reward them.