The epitome of East London cool and edginess, Pure Evil is an artist run gallery set up by street artist Charles Uzzell Edwards, AKA Pure Evil, in 2007. The EC2 Gallery now had a sister just a couple of doors away. The stripped, concrete walls and use of basements help maintain that street art vibe where Pure Evil displays his own works alongside that of other artists such as Banksy.

Controversial Cosmo Sarson takes over most of one floor with his works. Previously painting a 28ft mural of a breakdancing Jesus, here we see him explore and take this theme further. 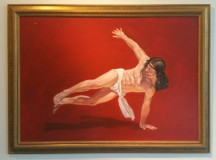 Most of his works are classified as oil paints and charcoals but Sarson also mixes it up with the obvious street art tool of spray paint, as well as more traditional etchings – then back to the contemporary arts with the sporadic use of pixels and dragged paints. His most striking works are the earthy coloured Breakdancing Jesus oil paintings. With a vivid rusty, simple background Jesus effortlessly holds differing poses. His calm face and statuesque stance is at odds with the movement of breakdancing and the tension in his muscular body. The black and white charcoal images are more fluid and have a real sense of movement created by Sarson sketching extra limbs as if our eyes can’t keep up with the rapidity of dance. Loose marks on the body as well as curved strokes around the figure also help create the sense of speed and ease.

Alongside these, Sarson presents works relating to Greek myth and gods and monsters. The works are predominantly couples in dramatic poses such as in Medusa and Minotaur. As well as the subject matter, his chiaroscuro is reminiscent of the famous Caravaggio style. These works are darker and much more dramatic yet still retain the essence of a choreographed dance and like the Jesus paintings contain a sense of peace among the tension. Sarson unashamedly throws together classical subjects and the contemporary urban world to purposely blur the boundaries. We’re not able to compartmentalise and Sarson forces us to read these works as new urban myths and heroes.