The computer-generated images came in two by two, hurrah, hurrah!

Darren Aronofsky’s new film Noah ends with the usual do not sue us declaration that the persons and events in this picture are fictitious…any resemblance to persons living or dead…blah, blah, blah. This seems unnecessary as Noah died 5000 years ago, the statute of limitations for libel is a year and we all know that you can’t libel the dead. Nevertheless the warning tells you all you need to know about the veracity of Aronofsky’s new film. He hasn’t set out to make a Biblically-accurate account of Noah’s life. That would involve a lot of sawing, hammering and chopping down trees – followed by much floating aimlessly whilst trying to stop the lions eating the lambs. If Aronofsky had pitched a 139 minute screenplay of such large-scale DIY boat-building and sailing then he wouldn’t have raised much of the $130 million he needed to make Noah. 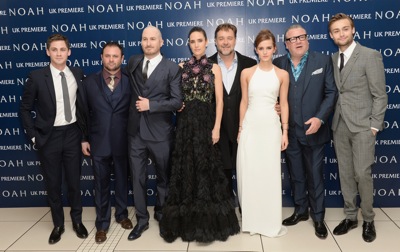 Like most films based on literature the movie was always going to differ from the book. That’s not a problem when relatively few people know the original plot. With the Bible being the world’s best-selling book, quite a few people will know the story of Noah, so it is surprising the director has departed quite so far from the biblical account. After watching this film there are going to be a lot of people turning to Genesis for the first time, expecting a rollicking story of rock-bodied, ark-building monsters, large-scale battles and violent patriarchs – all set in a desolate Mad-Maxian pre-apocalyse world of black lava and tree stumps. They’ll be shocked to discover that apart from the basics – ark, flood, dove, olive branch – Aronofsky was using his artistic licence.

The filmmakers have embraced CGI. The mixture of live action and computer-generated imagery only jars in a couple of scenes, where the actors are clearly not walking on the same ground as the virtual monsters. Much of the landscape, the ark itself and the animals and birds entering it are computer-generated. Not that the animals and birds are in many scenes. You’d think it would be hard to film a story of Noah’s ark without having lots of animals around, but here Noah’s family have access to an incense that puts the animals to sleep. A few wafts from the censer and they all disappear for the duration of the trip, handily reducing the need for cgi-ed animals in every scene. It doesn’t affect humans, which is lucky.

Russell Crowe presents a very different image of Noah to that in the Bible – and not just by being at least 550 years younger than Noah was when he built the ark. Noah’s character has been changed, in order that he can travel on a different kind of arc – the Hollywood character development arc. His experiences will change him, but Crowe’s Noah is a conflicted fighter, growling his way through the newly-added battles scenes. Blameless he is not. He loves animals and flowers, but when it comes to humans he’s often killing here, threatening to murder there. He hears God’s message of forthcoming destruction in a Bill Viola-inspired dream sequence, but misunderstands the part he has to play. His struggle and confusion has been added to the story, imbuing Noah with very human doubt, uncertainty and misapprehensions.

Anthony Hopkins cameos as a hill-dwelling Methuselah with a craving for berries and the unusual power to heal barren wombs. Emma Watson plays the beautiful Ila, wife of Shem and catalyst for Noah’s self-discovery whilst Ray Winstone turns up as Tubal-Cain, a personification of the evil within that we cannot shake off.  Incase you’re not sure when something evil is happening, the music by Clint Mansell is overly intense, marking out clearly the emotions that we should be experiencing at any moment.

Noah is not a scripture lesson. It takes only the bare essentials from the Genesis account – although one of these is the distinctly un-shipshape rectangular shape of the ark. Another, maybe surprisingly, is Noah’s drunken encounter with his sons. The theme of punishment for sin remains, but in the hands of Aronofsky Noah battles an urge to do the smiting himself. The monsters are silly but make clear the fantasy world that the film inhabits and extinguish all suggestion that what is being seen is biblical.  A more authentic title would have been ‘Inspired by Noah‘  but that wouldn’t have provoked as much controversy/coverage/ticket sales.

The movie is well-paced and more gripping than the tale of Noah usually sounds. Of course that’s because it’s not really the tale of Noah. Aronofsky has used the bible episode as a launchpad for a fictional apocalyptic story of evil versus, if not good, then at least not-as-evil. If the film wasn’t called Noah it would be another — albeit wetter than normal – end-of-the-world blockbuster with violent interludes. Calling it Noah and then telling a story that isn’t Noah’s is a strange decision. Christians will be attracted and then disappointed by the director’s inventions. Blockbuster fans will be put off by the thought of a two hour sermon. Some people may be inspired to pick up a Bible and read the story of Noah. Others may leave the cinema with the idea that the story on screen is biblical. It isn’t.

Most of what is in the film has come from the imagination of D. Aronofsky and co-writer Ari Handel, not the Bible. Anyone who knows the story of Noah will notice a lot of extraneous trumpery. Aronofsky marshals his $130 million with skill though and it is quite exciting trumpery, which means the lengthy film doesn’t drag. If however you want to read the Biblical account of the flood, click here. Prepare for fewer monsters, no mention of swords and absolutely no Ray Winstone whatsoever.