Out of 12,000 applicants five people were chosen to ride a new Enduro BMW R 1200 GS for part of a 44 day trip across challenging terrain the world over. Each rider had their turn on one continent, before the bike was given to the next rider to complete their part of the tour. In the end the bike will have covered over 7000 miles!  This new bike is the latest iteration of the BMW concept of a large touring enduro bike with a brawny engine, popular with riders the world over.

What could be more fun than being part of this adventure? The tour got under way in Laos on 25 January 2013. Nine days later, the GS was handed over to the next link in the chain in New Zealand. After another eight days’ riding, the bike headed to South Africa, before being passed to the fourth participant, who had 10 days to explore the western USA. And, finally, the last member of the group set off across Europe for a date in Munich on 13 April. The different parts of the trip

It fell to 35-year-old Alessio Cigolini to turn the first wheel of the tour in Laos on 25 January 2013. The Italian and his support team promptly embarked on nine days negotiating rocks, gravel, dust and asphalted roads along the Mekong River and riding through mountains and jungle landscapes. 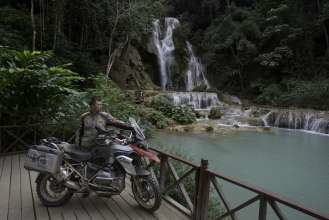 Cigolini also forded more than a few rivers and explored remote areas outside Luang Prabang, something that was only possible with experienced guides from the region. The team made frequent stops along the way so as to get to know the Laotian people – who had welcomed them with such warmth – a little better. Alongside the beauty and fascination of the trip, Cigolini was faced with ample challenges and tests of endeavour, including slippery wet slopes, tight hairpins and thick mist. However, by the end of his leg, the smiling Italian could reflect on the knowledge that he had just experienced “the most impressive and unforgettable week of my life”.

Bavarian rider Herbert Unger took over the keys to the BMW in Christchurch to cut a swathe through New Zealand’s South Island. First up for the 49-year-old were some enthralling stretches of road taking in the fishing villages along the coastline on the way to the mountains. 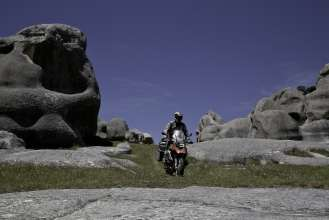 A stop-off in Queenstown was then followed by “the toughest 18 kilometres of my life” across rivers and over mud-caked ascents into New Zealand’s distinctive mountains. Unger and the crew had the privilege of exploring some now famous backdrops on their bikes. Indeed, Castle Hills – a location used for the filming of “Lord of the Rings” – provided a suitably special end to a very special tour.

41-year-old Spanish rider Salvador Echevarria was given the chance to pilot the new R 1200 GS across South Africa – and make a variety of acquaintances with people and animals along the way. As a special surprise, a group of 40 GS riders had gathered in Cape Town to see him on his way and ride alongside him for the first 230 km of his trip atop the rocky cliffs overlooking the Indian Ocean. Cape of Good Hope National Park provided the new touring enduro with a stunning stage of rain-soaked roads and ultra-rough terrain. 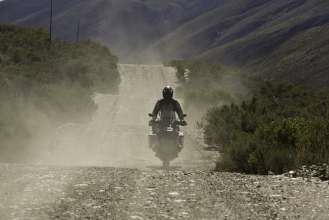 The Spaniard’s team also ventured along one of the world’s most famous off-road trails, just the other side of De Hell, where rocky tracks and vertiginous hillsides demanded absolute concentration and riding precision. Nature had laid on a truly extraordinary experience for all concerned.

“GS goes to Hollywood” was the message for 39-year-old Stéphane Gautronneau as he climbed onto the new R 1200 GS in Los Angeles for the first time. The successful French candidate had 10 days to soak up the western USA – canyons, surfing beaches and all. This was a journey of climatic extremes, over the peaks of Californian mountains, through desert scrub along the Pacific coast, picking his way over trails covered by snow, packed in mud and swirling with dust. 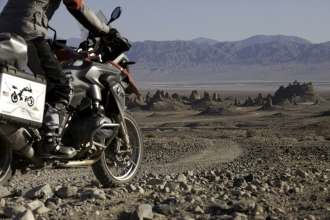 The tour also took in cities including Los Angeles and San Francisco, as well as ghost towns shimmering within the scorching heat of Death Valley. Gautronneau summed up the experience of a typically fulfilling day:  “Riding a wonderful machine along this demanding road – that’s rock’n’roll!”

British rider Stephanie Rowe is the youngest of the competition winners – at 25 – and also the only woman in the field.Her tour began in Barcelona, launching rider and machine on a journey across the fifth and final continent of the “One World. One R 1200 GS.” expedition. The European leg of the journey will have taken Rowe through five countries – from Spain, across France and Italy, via Austria to BMW’s home city of Munich. 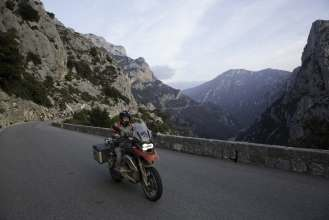 Along the way she has already piloted the GS over precipitous Pyrenean mountain passes to the partly unsurfaced roads of the Languedoc and Auvergne in France. Once into Italy, her route leads through the rolling Tuscan hills and around the winding roads overlooking Lake Garda. There she will link up with fellow participant Herbert Unger, who will accompany the Briton over the Italy-Austria border and share the final kilometres of the tour with her through to the finish in Munich on 13 April.

The winners of the competition were chosen by a celebrity jury of well-known bikers including Oscar-winning actor Adrien Brody, motor sport legend Jutta Kleinschmidt, Hollywood action star Rick Yune and TV adventure rider Charley Boorman. Each of the winners has been able to experience the motorbiking week of their lives on one continent, but only the BMW bike has completed the full, world-encompassing distance.