To the Saatchi gallery in Chelsea for the opening of two new shows: Pangaea and Continental Shift. Pangaea fills ten of the large galleries and is a look at new art from Africa and Latin America. It refers to the prehistoric landmass that conjoined Africa and South America and I’m told it’s pronounced PAN-GEE-A. Downstairs is Saatchi Art’s inaugural exhibition of work by emerging artists including Tahnee Lonsdale and Simon McCheung. This is curated by Rebecca Wilson and entitled Continental Shift. referring to the recent move of SaatchiArt from London to Los Angeles. It’s pronounced CONTINENTAL SHIFT.

Gallery one is packed. Everyone comes in to the Saatchi building, turns left and admires Rafael Gomezbarros’ Casa Tomada. Or takes a glass of wine and chats. The well-dressed and the experimentally-dressed mix easily. There are even a couple of pairs of shorts that somehow made it past security. 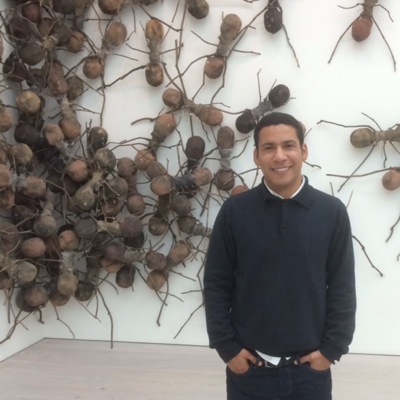 The work seems totally different with the buzz of chatter. Without the people the hundreds of ants – with bodies cast from human skulls – climbed the walls for no apparent reason. Now they seem to be escaping the fashionable crowds. How they hold on to the walls is unclear, with no visible means of support they just awkwardly are like the fleeing victims of oppression he is representing.

The next room is emptier, the large pictures by Aboudia from the Ivory Coast hanging like Haring drawings with expressionist backgrounds. They have the dull surface of acrylic. People take photos, some peer at the work and say things like so intense. Mainly they talk and laugh, surrounded by paintings of child soldiers playing with rocket launchers and machine guns – a record of the violence in Abidjan, after the 2011 election. A woman in bright African dress comes in. People peer to see the labels.

Have to queue to get out of the gallery. A bottle neck of drinkers by the stairs. Huge bold paintings by Antonio Malta Compos. Almost recognisable faces that disappear when you study them. Portraits of deformed chess pieces wearing summer hats. Visually weird and not precisely ‘new’. One dates from 2004. Or it might be 2007 – I would check the label but I can’t find it. Two people discuss Jose Carlos Martinat’s glass piece Ejercicio Superficial #12. Purloined, graffitied window assemblages from Peru.  He showed me photos of it being taken from the building earlier on his phone. A big job. He didn’t paint the pieces. ‘Do you know who did the painting?’ I asked. It seems he had permission to take the glass, but doesn’t know who created the images on it. He’s also developed a technique to ‘peel’ graffiti off walls, but there is none of that work in the show.

A man walks past with a motorbike helmet swinging from his hand telling someone on his phone to Aspetta! A golden handbag hangs from a shoulder. A security guard comes around the side of the sculpture to make sure I’m not trying to steal it. I’m not, so all is OK. Two people – one magnificently hairdo-ed ignore the art and talk about the ceiling.

Is that a security guard or an artist?

Downstairs the off-putting aroma of Richard Wilson’s 20:40 or is it 40:20? [It’s 20:50 – Editor]. ‘I’ve got a show at the Royal Academy’ someone says as I enter the Editions and prints room. Here the Continental Shift show of emerging artists is in full swing. Instead of one or two artists in a room as upstairs here there are loads. Artists, their friends and potential buyers walk around – this work is for sale. Standouts: Andrew Salgado’s portrait, Enjoy the silence. Tommy Ingberg’s surreal photos.
‘I quite like this actually’, a girl says as she looks at a painting. She sounds very surprised, as though the last time she had liked a painting was back in 1996. Simon McCheunhg’s work draws attention. The piece shown is similar to Martin Stranka, except in price. People compete to photograph the photograph. 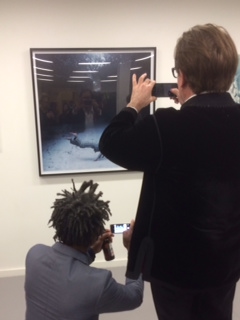 Back in the main show the work drawing most attention and photos is Jose Lerma’s blue-biroed Madre Perla. A woman briefly dances in front of it. The work by Christian Rosa is ignored completely, everyone agreeing the mysterious Kandinsky-esque compositions were more interesting for the artist to make than for people to look at.

On the first floor people are tiring. The few places to sit along one wall are full. Dyed hair and heels would have been on trend, I’ve come in neither. In the gallery people check their phones, finish glasses of mojito. One man studies David Koloane’s work of frantic urban life – made of loose, restless strokes. I take a wrong turn and am in the shop. Ten more minutes I hear someone one say to someone else. Two men discuss a contemporary ring that one of them is wearing, a woman slips off her shoes. Young men sip through straws. 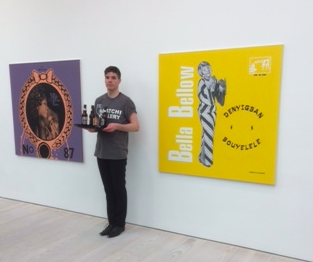 In another gallery Vincent Michea’s bright colours decorate the walls. The pieces seemed lifeless reproductions earlier, now they work better as advertisements or party decorations. Oscar Murillo’s deflated footballs are still where they were placed on the floor. Amazing given the crowds. For a moment no one in the entire room looks at the work.

The art world is shifting, showing greater interest in the huge creativity outside the usual Euro-USA regions. Referencing the ancient Pangaea doesn’t suggest the hip and contemporary, but the best works here are responses to very relevant subjects such as migration and civil unrest. These are issues in the West, but the different perspective from African and South American artists is welcome.

Back outside it’s warm! Well, warmish. British Summer Time has just started. Maybe it will be sunny until October.