Spanning the gallery’s three locations and waterside garden, the new Yayoi Kusama exhibition features new paintings, pumpkin sculptures, and mirror rooms, all made especially for this presentation. This is the artist’s most extensive exhibition at Victoria Miro to date, and it is the first time mirror rooms have gone on view in London since Kusama’s major retrospective at Tate Modern in 2012.

Yayoi Kusama’s lifelong exploration of the self’s relationship to the infinite cosmos has given rise to a highly influential career in which she has continuously innovated and re-invented her style. For the exhibition at the Wharf Road galleries, she has created three mirror rooms: Pumpkin’s Infinity Mirrored Room, Chandelier of Grief and Where the Lights in My Heart Go, all of which place the viewer within a universe of varying proliferating reflections. 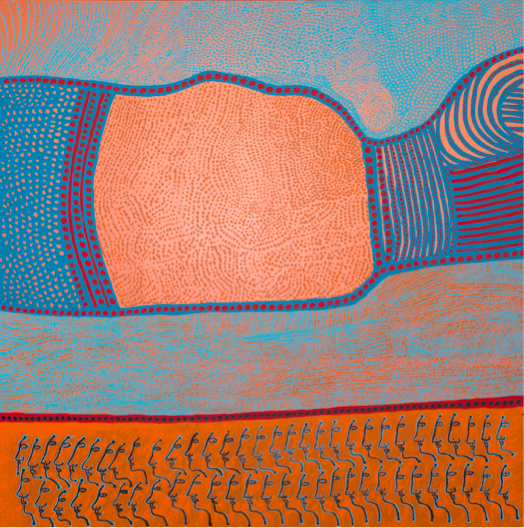 New paintings displayed alongside these immersive rooms continue an enduring preoccupation with multiplying polka dots and dense scalloped ‘infinity net’ patterns – Kusama’s obsessive repetition of these forms on canvas, which she has described as a form of active self-obliteration, responds to hallucinations first experienced in childhood. The pumpkin, another motif that she has returned to throughout her career, is also present in the form of new polished mirror sculptures.

Victoria Miro Mayfair will present new paintings from the important ongoing series My Eternal Soul, which Kusama first began in 2009. Each is a flatly painted monochrome field that abounds with imagery including eyes, faces in profile, and other more indeterminate forms, often in pulsating combinations of colour. Joyfully improvisatory, fluid and highly instinctual, they testify to the indefatigable, paradoxical drive to expression that has unified Kusama’s constantly evolving oeuvre over seven decades.

Yayoi Kusama has developed a practice which, though it shares affiliations with Surrealism, Minimalism, Pop art, the Zero and Nul movements, Eccentric Abstraction and Feminist art, resists any singular classification. Born in Matsumoto City, Japan in 1929, she studied painting in Kyoto before moving to New York in the late 1950s. By the mid-1960s she had become well known in the avant-garde world for her provocative happenings and exhibitions. Since then, Kusama’s extraordinary artistic endeavours have spanned painting, drawing, collage, sculpture, performance, film, printmaking, installation, and environmental art as well as literature and fashion (most notably in her 2012 collaboration with Louis Vuitton), and product design.

Yayoi Kusama was recently named the world’s most popular artist by various news outlets, based on figures reported by The Art Newspaper for global museum attendance. Her exhibitions were consistently the most visited worldwide last year, with three museum tours simultaneously traveling through Asia, Central and South America and Scandinavia all drawing record-breaking attendances.