My brain and I have a complicated relationship. Should I want transfats or attempt a Thatcher-esque lack of sleep regime in order to squeeze more into days, it will patronise like I’m a negligent tenant, even fine me: the currency being happiness and the sense of well being. My I seems at these times to not include my brain.

In the Wellcome Trust show are brains, loads, scooped from their cosy receptacles and either pickled, sliced, plasticised©® or photographed left, right and centre. They have been unseated from their clumsy slave-bodies to be revealed in all their grey blobbery. What did the early trephinists expect to find when they scraped through the thin bit of a six year old’s cranium with a sea shell and peered through the bloody hole?

There is a lot of science, of course.

Meanwhile, upstairs is Henry Wellcome’s collection of anthropological artefacts. The anti-onanism devices which looked like napkin rings with saw-teeth on the inside; an assortment of Victorian enema syringes with varying lengths of nozzle for reaching further and further towards the brain; the desiccated Inca in a recess – 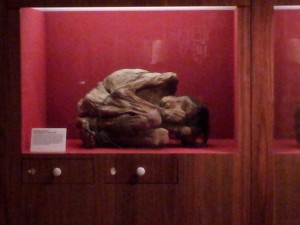 A dried out human hugging knees to its chest. And with all those juicy, pickled brains downstairs. This poor-old ex-human tucked in a wall, so far away from the dribble and glisten of being alive. How to feel sorry for an inanimate object, because this was the colour of dried porcini. Legs like cigars. The sand-blasted cranium empty.

Looking at the most complicated structure in the universe isn’t in itself the most satisfying experience; meat past the sell-by date. But my brain liked it. I was craftily instructed to bring my brain to see others of its kind. It hid inside me and made out it was me who was interested (the café is marvellous). And it is still mulling over the show.

For me (sans brain) there was a coldness, a detachedness making me feel left out. The scientists are like Edmund Hillary s, and all the men and women whose brains were out were Everest s. The staging posts were Trephining ( low down, probably below sea-level) up to the psychedelic iMRS images of a brain responding to Stravinsky’s Rite of Spring, which were Everest summits at sun rise and set.

Now I’m home and writing and my brain is up there shifting and pulsing until one day it gets switched off and all will be erased. The coldness of space a few centimetres behind my nose; the coldness of science. Later, David Attenborough goes cross-eyed, he’s so close to the intertwined mating leopard slugs. Whatever size can their brains be?

Later still, there happens to be a scientist on the Radio bemoaning the fact that, though it has mostly been scientists, in his view, who have helped shift civilisation on, it has almost always been artists who have occupied the historic front pages. He is kind of right to be upset, but brains aren’t pretty. I didn’t even mention minds.