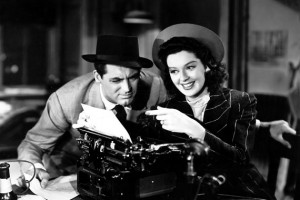 Newspaper journalism seems to be having a mid-life crisis. Gone is the sure strut of its youth, encapsulated by the newspaper boy’s call of “Extra! Extra! Read all about it!” as the crowds form around him to devour the latest gossip and global crises. Today we are faced with older, but not necessarily wiser, media outlets. Flashy websites and a desperate attempt to master Twitter are the newspaper’s equivalent of the middle-aged man buying the obligatory Harley Davidson. Perhaps that is why all the best films about the business were made long before the advent of the web, when the profession had a more stable identity.

Take His Girl Friday (1940), for instance. Sexual tension holds this picture together, which is a good thing because the poor preservation of the film means nothing else is, sadly. Cary Grant and Rosalind Russell (pictured above) play divorcing reporters brought together for one last case. They spend most of the film exchanging tongue lashings and looking at each other like they would much rather be swapping saliva.  If you can get past the muffled soundtrack and grainy footage, this is one of the best showcases of verbal wit you will ever encounter; when someone remarks on how charming Cary Grant’s Walter is, Rosalind Russell quips “He comes by it naturally, his grandfather was a snake”. It is hard to imagine many actresses today pulling off the droll sexiness of Russell in this film. Indeed, cumbersome lip fillers probably mean they have clauses in their contracts against two-syllable or more words.

Before becoming known for his grizzled cowboy roles, Gary Cooper actually plied his trade playing hapless small towners exploited by the newspaper biz. Mr Deeds Goes to Town (1936) sees the eponymous country bumpkin inherit a fortune and become the target of award winning journalist Louise Bennett. As she falls for him, she begins to regret portraying him as an inept eccentric in the press. If you can suspend belief and embrace the fact the film has a Pulitzer Prize winner still rooming with one of her best mates, it makes gripping viewing. Accused of madness due to his extravagant philanthropy, Mr Deeds has interesting implications for our own times; is it really so insane to help those struggling in a recession? After all, these are the same people who stare out at us hopelessly from every newspaper’s front page.

Likewise, Meet John Doe (1941) sees Cooper get caught up in a newspaper-induced quasi-revolution. Barbara Stanwyck’s desperate journalist creates a fictitious man threatening to commit suicide because of the ills of society. Cooper’s tall, dark and handsome ex-baseball player fits the bill to pose as this ‘John Doe’ to milk the ruse and keep paper sales up. What follows is a sort of 1940s version of ‘We are the 99%’ as ‘John Doe’
begins to believe his hype and embrace his growing role as the nation’s moral saviour; ‘John Doe’ clubs rally and protest for better economic opportunities. Sound familiar? On a side note, there is also one particularly Freudian spanking scene between Stanwyck and Cooper that I will probably have to explain to a therapist one day.

It Happened One Night (1934) is also quite risque. Spoilt heiress, Claudette Colbert, is hunted down by Clark Gable’s rakish reporter in a bid to get a scoop for his newspaper. Noted for its pioneering on-screen nudity (Gable doesn’t wear a vest underneath his shirt (gasp) and Colbert flashes her gams in order to hitch a ride), It Happened One Night is actually a very sweet love story, filled with sparkling dialogue to stop you reaching for the sick-bag. Plus, any film featuring an extended metaphor for putting out involving a trumpet and shouting about the Walls of Jericho is worth it for that alone.

Of course, I couldn’t finish without mentioning Citizen Kane (1941). The rise and fall of the newspaper tycoon has entranced generations. Whether you believe the hype or not, this is another film that resonates with our own time. Rupert Murdoch’s recent fall from grace echoes the lonely demise of Kane; when all the adoring groupies are gone, where does the self-made man turn in his twilight years? At least Murdoch has his
spry wife to defend him, Kane was only left with crumbling towers of memories.

It is striking many of these films have so much relevance to life today, but it is dismaying that so few nowadays can boast the same. In an age of new technology where celebrity rules, it is hard to tell a news story apart from a reality show. Perhaps that is why more recent, well-crafted films concerning journalism also focus on the past. The Lives of Others (2006) managed to be an original exploration of writing under Stasi oppression and the all-consuming desire for celebrity. A far cry from the current parade of Carrie Bradshaw knock-off films that are more about an all-consuming desire for shoes than anything else. The Devil Wears Prada, anyone? Nevertheless, maybe all hope is not lost. The interesting times our media faces could kick-start a revival of the newspaper film- though I doubt the euphemism ‘the Walls of Jericho’ will ever catch on.