Be careful how you dress your feet, for there is danger aplenty in your choice of sock

I must apologise for the lack of sartorial instruction that has been emanating from my fountain pen in the last few weeks. The reasons I shall not go in, suffice it to say that I am still alive and I will not be returning to Montmartre for many years. I am able at last to scribble a few words about one of the horrors of the age, something that has been pressing on my mind for too long. 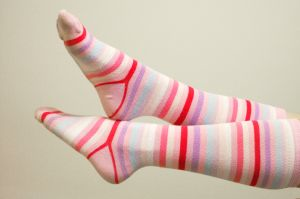 I am sure that the fellow who invented the sock was a well-meaning type of cove. Only the sort of chap who wants to see the best for others could invent the sock. I have carried out copious research and have been unable to put a name to this intrepid soul who first saw the need for something to come between skin and shoe, something to keep the bitter winds from the ankle of humanity. Logic suggests it may have been Mr Sock, but the Encyclopaedias are quiet on the subject. Who invented the sock is one of those many things that at one time so many people knew that nobody bothered to write it down.

Are there any socks that can legitimately be worn by the contemporary gentleman? The answer is an equivocating yes. Be ye everso careful, for the sock chosen today can contribute to your downfall tomorrow. The plain, unadulterated black sock is almost without exception allowed and allowable. Some authorities even allow for the wearing of navy blue. I say, navy blue is fine – as long as you have chosen a shade of blue so dark that it is indistinguishable from black. If you haven’t then don’t take the risk. The repercussions of wearing an ill-chosen sock are many, varied and usually bad.

What then, I am often asked, of Argyll socks? Are they ever permissible? The answer is yes, by all means, with one proviso. As long as you are not going to set foot outside your house, then the wearing of a muted Argyll patterned sock is fine. As soon as you intend to step over the threshold, remove the Argyll from your feet and reclothe them in something more suitable.

There will be consequences to following this advice. Life may seem everso slightly easier. People will treat you with more respect. You may find children imitate you and want to be like you when they grow up. Such is the world that can exist if you choose the right sock. If you don’t, if you ever find that you dressed in a daze and are wearing socks that disappoint, never fear to whip them off and go sockless. Many is the gentleman who has been saved from a sock-based failure or disappointment by this sudden realisation. Marriages have been saved by the judicious removal of an unpleasant sock.