Where’s Warhol (Laurence King Publishing) is the latest and most unique take on the ever popular Where’s Wally. This version challenges children, art and history enthusiasts to find Andy Warhol in busy scenes of art history’s most iconic moments – from Renaissance Italy to Salvador Dali’s wartime surrealist party, and from the drug fuelled 1960s London art and music scene to the ruins of ancient Pompeii. Each scene is also filled with key figures related to the time, from Claude Monet to Keith Richards, and the book has a detailed appendix for those keen to know more about each iconic moment in art history and the characters that dominated it.

Pop-art legend, devout catholic, and a man with one the most distinctive silver wigs of all time, Andy Warhol is the world’s most instantly recognisable artists. In his heyday he was a regular face in the crowd at New York’s Studio 54, but can you spot Warhol hiding in some of the most famous art scenes of all time? Can you find the artist lost in the dream-induced world of Salvador Dalí, the Napoleonic Paris of Jacque-Louis David, or Michelangelo’s Sistine Chapel?

Andrew Rae is an internationally acclaimed illustrator and member of the illustration collective Peepshow, his illustrations have been commissioned by some of the world’s most renowned brands including Nike, Puma, Nintendo and Sony PlayStation among others.  His instantly recognisable style has featured in The New York Times, The Washington Post, Time Magazine, The Guardian, Die Zeit, and Vice. He currently lives and works in London. 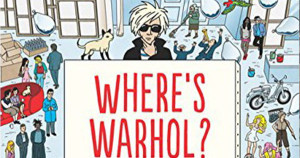 Catherine Ingram is an art historian with degrees from Glasgow University, the Courtauld Institute, and Trinity College, Oxford. She is an MA lecturer at Christies, and also teaches art history to undergraduate scientists at Trinity College London, she also runs courses in art history at TATE Modern. Catherine lives with her family in London.