Drifting gently toward us (with a little help from the ‘digital highway’ and/or the postman, depending on your preferred media) all the way from the seaside town of Floro, Norway, the wondrous, beguiling songs of Tina Refsnes are imbued with a fitting simplicity and honesty that perhaps belies the fact that she openly admits that, while growing up, she longed for the confusion, hustle and bustle of city life.

On a personal note, I became aware of Tina’s music a few years ago when compiling an album of Christmas songs for a small indie label. Having trawled the internet and put out numerous requests for appropriately ‘festive-but-reflective’ material, I’d pulled together a rough cut of the album and then, purely by chance, stumbled upon a collection of five or six songs by Tina which she’d self-released via Bandcamp. One of the tracks, “A Song About Trust” (which is really not a Christmas song at all incidentally) resonated with me. In its original form, the song was largely acoustic, polished (but not over the top) in terms of production and, from my perspective at least, spoke very beautifully and honestly about letting go and moving forward… forgiving and forgetting… so, in my mind at least, it fit the brief. Tina and I spoke, she expressed her lack of love for her (then) recorded rendition of the song, but agreed to us using it. The song has stayed with me ever since, until recently when I happened to look Tina up on Twitter whilst sitting in a cafe in IKEA (Tina is Norwegian, IKEA is Swedish… somehow the dotted lines joined up for me… I can’t explain my logic). I was overjoyed to discover that firstly, Tina was releasing a long overdue debut album and second, “A Song About Trust” would be resurrected.

In short, the album is beautiful… perhaps overtly simple, but beautiful nonetheless. And that inherent simplicity leads, without pretence or conceit to a very straightforward conclusion within seconds of the opening song: that Tina has taken her time and considered her moves in making this debut. Indeed, when Neil Young told his drummer to keep it simple and sit on his left hand when making Harvest, he did it for a reason… and the same logic applies here. The whole record was recorded by producer Robbie Lackritz (Rilo Kiley, Feist, The Weather Station) within a week, in a room, probably (I would guess) much of it being rendered live with her band. It is spacious, considered and above all SIMPLE… and that’s the trick of it!

Throughout the record, Tina delivers her songs with a gentle, unstrained ease. Her vocals are never particularly hushed, in fact there’s a throaty resonance to her voice (unlike several of her notable influences – Sufjan Stevens, Laura Marling and other wispy folk singers et al). Fine examples of her knack for arrangement and her vocal dexterity are numerous, but noteworthy are “Leave This Heart” as a breathtaking reimagining of “Only Love Can Break Your Heart”, while “Upside Down Clouds” has a refrain that has all the gymnastics you’d expect of Joni Mitchell taking on Vashti Bunyan.

Lyrically, the groundedness that typifies Tina’s writing is starkly evident on “Told” which explores the theme of aging. New Zealand-based singer-songwriter, Tiny Ruins, deals with the same subject in her song “Priest With Balloons” by imagining an old man so desperate to reach heaven he ties himself to a hundred balloons, noting glibly, if that plan fails, at least he’ll “go with a bang”. By way of comparison, Tina’s poetry offers an altogether sturdier vehicle for contemplating the brutal realities of the passage of time, without the sugar-coating offered by a ‘nice story’  – “I like how it taints me, changes and takes me from the world that I thought would always last”. Throughout the album, Tina deals in open and unguarded observation rather than narrative, resulting in a refreshing directness, and demonstrating an ability to communicate both ideas and emotional content with finesse. 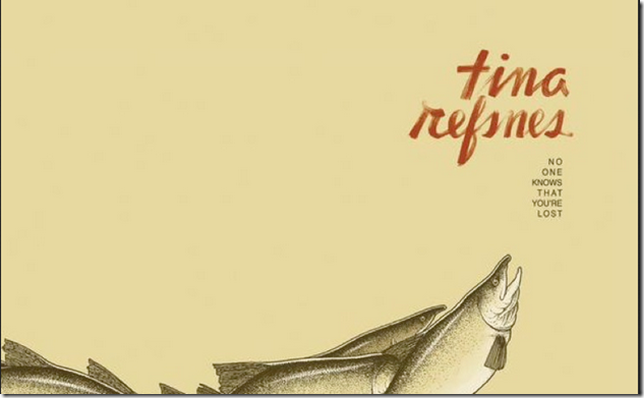 No One Knows That You’re Lost is a fine album. Such love, thought, care and time have gone into its creation – it is perhaps unsurprising that there is so much to enjoy here. If you want a musical accomplice to help you quietly contemplate your hopes, fears and dreams, Tina may well end up being your new best friend.

Find out more about Tina and her music at www.tinarefsnes.com