I overheard a couple complaining that the weather in Hay-on-Wye was so topsy-turvey you could get frostbite before breakfast and sunburn before lunch, but when I arrived it was only raining. ‘Welcome to the dry Hay Festival,’ boomed the man behind the welcome desk as I walked out of the drizzle into the entrance hall. ‘I’m not joking’, he continued, ‘It is dry inside.’ He was right – even though it was wet outside the festival site was completely dry. It is an intricate complex of marquees, all joined by covered walkways. Constructing the site is an engineering feat in itself – an interesting talk could tell of how the whole site is put together. 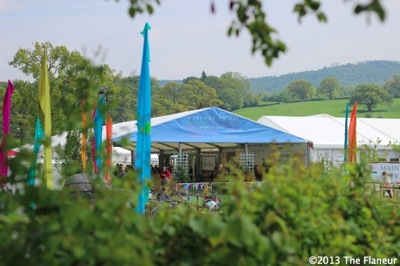 Hay-on-Wye is in Wales, just. It’s right on the border and some of the town is in England. You can tell whether or not you are in the Principality by whether the shops charge for plastic bags. (In Wales they do. 5p each)  The rain soon give way to sunshine and visitors took the opportunity to sit on the grassy courtyards between the marquees and eat and chat and read. That’s one of the shocks of the Hay Festival – there are people reading everywhere. Elsewhere people play with mobile phones or stare into space, but at Hay Festival they read. With a big Oxfam bookshop on site and a festival book shop selling all the works of the many speakers there is plenty of choice. People sit down and pull out a paperback. Or a newly-signed hardback. Or at the least a copy of the Telegraph.  It’s like a big open air readathon. 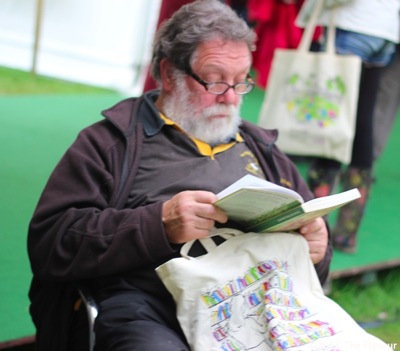 As festivals go Hay is a well-organised, un-muddy affair. Trendy wellies are the order of the day, but in fact all the walkways are raised off the ground and even though I had arrived wellyless I was fine. Even early in the day there were lots of visitors, including many children, who are well catered for with a special Hay Fever programme of daily events. My first Hay experience was Simon Horobin’s lecture on Chaucer which was carefully aimed to appeal to the generalist rather than the Chaucerian expert. It was an interesting start and I left the Barclays Pavilion thinking I really must knuckle down and read The Canterbury Tales. I imagine most people leave each talk thinking I really must knuckle down and read [insert topic of talk]. The trouble is that there are so many talks. The ten day festival numbers lists over 460 events in the programme and more are added daily. 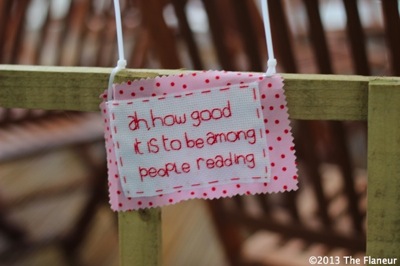 The Hay Festival has been steadily growing since 1988 but the impresario Peter Florence notes the date of its real take off as 2001, when Bill Clinton visited. Not because of the president’s lecture – coup though that was – but because that was the year of the foot and mouth epidemic. The disease threatened to shut the whole festival but the community came together to make sure it went ahead. There was a realisation that Hay had become something special. Now there are over fifty main events every day, as well as free workshops and shows such as portrait drawing and salsa dancing. 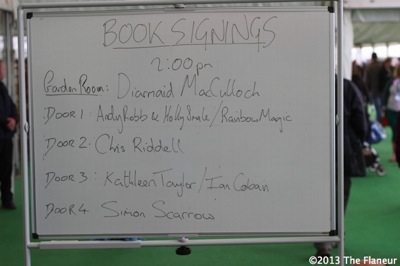 At 13:00 Diarmond MacCulloch was speaking on an unusual topic – Silence in Christian history.  He apologised for keeping us from our lunch, but his thought-provoking lecture was worth the minor sacrifice. I assumed we’d be getting a history of monasteries and monasticism, but MacCulloch pointed out that when you come to think about it, the Monastic tradition is completely unBiblical. Monasticism comes from Syria, he explained, who got the habit on their trade routes to India. It’s actually a Hindu and Sikh tradition. He is fascinated by what history doesn’t say and said he was addicted to telling the truth and ending silences.

Silent prayer is not originally seen positively in the Bible. Eli sees sees Hannah praying silently and accuses her of being drunk. Silence is controversial and Jesus embraced it. At his trial he remained silent, yet his followers, the early Christians did not. McCulloch noted three areas where Clerical silence has been darkest – child abuse, Nazi holocaust and slavery. That the church has ended its silence on gender and sexuality he saw as good – it is better to argue than pretend there is nothing to argue about. He thought that Protestantism could do with a little more silence and predicted Pentecostalism, picked as the noisest of Protestant denominations, would find itself going in that direction. 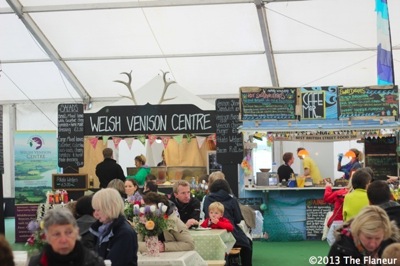 Even with a single menu choosing lunch is a tricky business. I’d like one of those I think as my eye goes down the list…no, one of those… I decide half-way down, before realising that everything on the menu sounds delicious. When there are many different emporia selling all sorts of deliciousnesses it is even harder. The choice was large, including antipasti platters, seafood and venison. As I was at a festival I decided on a burger, but the organic sausage dish that the women in front of me ordered looked so what-you-should-eat-at-Hay that I changed my mind.

‘You can’t really put a label on people,’ said a chap in a designer top as he sipped coffee and ate a slice of carrot cake. Two men sat down to a banquet of noodles, fish and paté on a lazy susie. I tucked in to Bwlch Farm pork and leek sausages, butter crushed new potatoes with spring onions and Celt golden Ale gravy. ‘Twas a good choice. 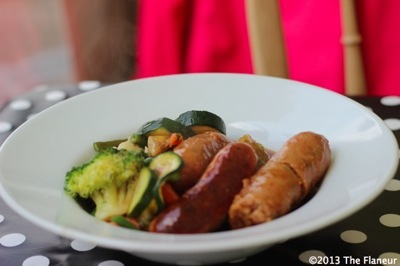 The shuttle bus into Hay is one of life’s great bargains, costing £1 for as many trips as you want. If you rode it all day it would probably be the cheapest mode of transport per mile in the world. It’s only a five minute journey, so I took it into the town and had a look around. Hay on Wye is famous for bookshops and on my brief perambulation I counted fifteen, including the huge Booth Books and a smaller shop devoted to ‘Murder and Mayhem’. The population of Hay is 1500, so the lucky locals have a bookshop per 100 inhabitants. If this level of bookshoppery existed in the rest of the UK there would be 627,000 bookshops in the country. I don’t think there are quite that many, and a quick check of the always-reliable internet suggests there are nearer 4000. Hay has well over its allocation, one of which is an honesty bookshop where you are trusted to pop the money in a bird-box, which presumably doesn’t also house a nesting bird. 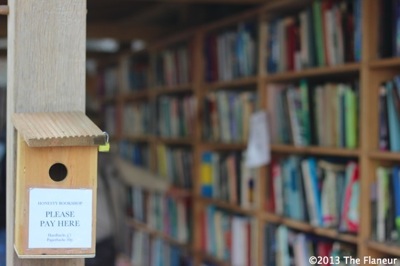 Back at the festival Damian Lewis and Helen McCrory were performing the powerful poetry of Keats, Shelly and Byron. This was presented as part of the Josephine Hart Poetry Hour which has shared great poetry read by great actors at the British Library for years. Hart died suddenly in 2011 but the Poetry Hour continues. 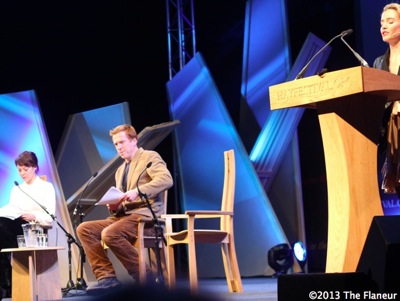 Lisa Dwan read Josephine Hart’s commentary as a brief introduction before the Hollywood stars let their talents loose on poems such as When I have fears that I may cease to be and On first looking into Chapman’s Homer. Hart was clearly a great fan of Keats, Shelly and Byron and would have enjoyed the performance given by the two married actors. Married to each other, I mean.  Performing to a packed Barclays pavilion they seemed to be relishing the language they were speaking, McCrory sometimes marrying her perfect diction with theatrical gestures. Their delivery of the amusing stanzas of Don Juan and Childe Harolde were a particular highlight.

By early evening the rain had decided to make a real effort, rolling its sleeves up and soaking Hay-on-Wye. Undercover I was able to laugh at its attempts to dampen my spirits and look forward to hearing Neil Oliver – the long-haired Scottish archaeologist off the telly – talking about the Vikings. Early historical records of the Vikings were all written by other people, which probably means they’ve had a bad press. The talk was amusing. He felt that he should say that his interest in Vikings came from reading the Sagas in the original Icelandic when he was a kid. In fact it was kindled by the Kirk Douglas/Tony Curtis film The Vikings. The crowd cheered. 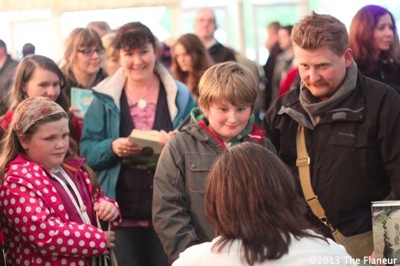 To finish off the day in style I saw Wara perform on the Wales stage. A mashup of Cuban and urban influences with added social conscience and two pairs of the highest heels in Hay. Nine musicians on stage playing funky salsa and soul whilst singing political lyrics about asylum seekers and police brutality. For the full review click here. It was the last act in a great day and I can see why Bill Clinton called the Hay Festival the ‘Woodstock of the mind’.