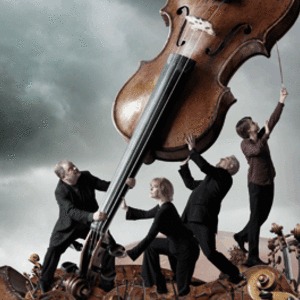 diaries of Shostakovitch to London and the exciting environs of King’s Place in Kings Cross.  The Brodsky’s have recently worked with Dawn Upshaw and Sir Willard White and have collaborated with Bjork and Paul McCartney, but Shostakovitch has been the backbone of their repertoire since their formation back in 1972. Indeed they have been labelled the ‘No.1 interpreter of Shostakovitch in the world’ by the Italian newspaper Corriere della Sera, so this was a concert series that was much anticipated.

This evening was the turn of Shostakovitch’s early Preludes and Fugues for Piano and his remarkable piano quintet, for which the Brodskys were joined on stage by Jenny Lin. It certainly lived up to its billing as a diary, due to its successful emotional fulfilment and the sense of journey owing to the collage of feeling bursting from the stunning examples of string instruments on display. Daniel Rowland’s violin was made in Cremona in 1793, Paul Cassidy plays a viola from 1720, Jacqueline Thomas’ cello was first played in 1785 whilst Ian Belton’s violin dates from around 1615! With the pianist, Jenny Lin, we were gently seduced into the piece with a slow, march type progression.  The gentle movement of the dynamics intrigued and prepared us for the running, echoing expression which was to come.  The climax showed the true potential of a pianist’s ability to unite their hands as the melody ran through both with an element of question and answer and at one point a murmur from the bass line with unexpected low notes.

The quartet progressed towards the same climax but at different paces making each part in the quartet a leader and not just a harmonising contribution.  The exceptionally captivating contrast between the plucking and the bow work was a beautiful decoration to the performance.  The combination between the piano and the crisp demand of the violin gliding over it was incredibly powerful.

The tapestry of sensations could only have been experienced in a live performance.  The acoustics connected us to this testament of a genius,  helped by the hall’s design – it is actually a box within the building that is supported on springs to give a complete acoustic separation from the rest of the complex. The Brodsky Quartet have studied the oeuvre of Shostakovitch  for 40 years – combining this scholarship with over 2000 concerts and their award-winning set

of CDs this was always going to be a concert series to remember for Shostakovitch aficionados and tonight’s concert was a great start to the series.

The Brodsky Quartet with Jenny Lin

1 Comment on Brodsky Quartet: The Musical Diaries of Shostakovich