Viking is a verb not a noun. That’s something I learned from an amusing talk by Neil Oliver at the Hay festival. The event was held in a packed Wales Stage marquee and gave an insight into Oliver the person as well as the people who used to go viking that are the subject of his new book 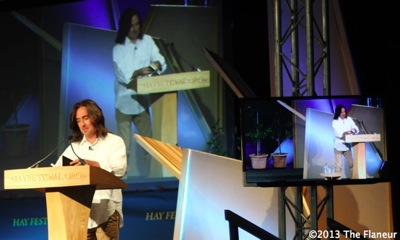 A triad of Neil Olivers at Hay Festival

He placed a book of notes on the lectern and didn’t refer to them once. Having been introduced as an archeologist, broadcaster and historian he started by saying that he was indeed a fully-paid up member of the archeology classes, but he was more ambivalent about his status as an historian. In explanation he told how he became known as an historian. It was not the orthodox A-levels, degree, post-graduate route. Qualified as an archeologist he was chosen to appear on the BBC’s Coast series in 2004. Later a researcher from the programme phoned and said as there was already an archeologist and an anthropologist on the team, that end of the alphabet was taken. ‘Would you mind being called a historian?’ Which is a lot easier than years at college with your nose in a book, but I guess you don’t have the same sense of achievement.

The Vikings are famous for raping and pillaging their way around the world, only stopping for a bit of murder and monastic desecration. Oliver points out that this was not abnormal and at the time everyone was behaviing in the same way. ‘Fancy a bit of pillaging?’ was what almost everyone said to their neighbour when the crops were planted and they were twiddling their thumbs waiting for the harvest. The Vikings’ great error, which has led to their fearsome reputation, was that they didn’t write anything down. Literacy came with Christianity and the Vikings were the last group of people to be Christianised. The sources we have were written by Christians and Muslims who weren’t impressed with these Thor-worshipping loons from overseas.

It might seem normal for people to hide all sign of descent from a group remembered for its barbarity. After all there are few people actively playing up the Nazi-credentials of their great-grand-mama. Maybe it is because it was so very long ago, but being of Viking origin is often seen as a positive trait. Oliver told how for one of his TV programmes he DNA tested people to discover which of the original tribes they had descended from. He commented that ‘telling people who thought they were from Viking stock that that they weren’t was more difficult than telling them they had a terminal illness!’

There is something about Vikings that we admire. Why is that and why do we overlook the violence? Oliver suggested it is something to do with their sense of adventure. Setting off without maps or sat-nav in a way that is impossible today. It might also be their world-view. Christians believe in an afterlife, the Vikings lived just for now. They wanted to make a big noise and be remembered. They were the original live fast die young brigade – 10th century James Deans with fewer Porsche Spyders and more animal-tooth necklaces.

Oliver told us that he is drawn to nameless people. He quoted George Eliot’s conclusion to Middlemarch to show the importance of those who have been forgotten. “…for the growing good of the world is partly dependent on unhistoric acts; and that things are not so ill with you and me as they might have been, is half owing to the number who lived faithfully a hidden life, and rest in unvisited tombs.”

In demonstration he sank to his knees and told a story. A patch of land, 6ft by 3ft had been excavated in Scotland. Hundreds if not thousands of shards of flint had been found all over it – except in four places. These were the areas where the craftman’s knees and toes touched the ground and prevented the flints from falling. He shared his marvel at the fact that 7000 years later later we can see with ‘sat-nav accuracy’ where this person knelt for twenty minutes to make a weapon.

Why did the Viking age come to an end? Oliver explained that the great success of the Vikings was that they took on the habits and traits of the local populations. They might arrive as marauders and colonists, but they didn’t impose their language, customs or religion. Instead they assimilated, soon dressing and acting like the locals. So though the Viking period appears to last 200 years, the Vikings didn’t then disappear. They had just realised that assimilation gave them the best chance of success.

An entertaining talk even if the most you know about Vikings is that they drank Skol. Ouch, that’s an old reference, but I think Neil Oliver would get it. Oh and the actual definition of viking is a bit hazy, but it refers to something akin to having an adventure in a boat. I think we can agree the Vikings were good at that.