Paddington Bear is more than just a story or a toy in British society. He is an icon, he is a hallmark of England and everything it means to live in this country. With this in mind the reel question is…will this new live action animation just panda to the masses? 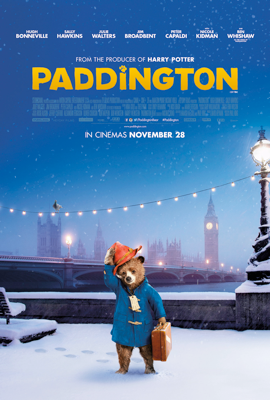 I can’t really remember Paddington being a big part of my life as a child, but I know for some people Paddington was very important.  I believe this movie has done them proud.

In its essence Paddington is about a very clumsy, lovable bear and the family he lives with. It’s the adventures that Paddington gets up to that really make the story come alive. He is so very clumsy and it is beautiful to watch on screen. To watch Paddington reminds me of how it must have felt to watch an incredible physical comedy actor perform like Norman Wisdom or Charlie Chaplin. To watch a master at work is always captivating.

It’s more than that though, Paddington appeals to us as a nation because he represents what it is to be British. The chase sequence in the film shows this best.

The film is also incredibly smart and funny, it has moments of sheer brilliance mixed in with all the other kinds of comedy you would imagine from a strong family event. This comes mostly from the writer Paul King (who also directs the work), he is famous for directing The Mighty Boosh. I truly believe it is only from a mind so macabre that you could get a work as eloquent as Paddington.

The other thing that Paddington has going for it is that the main star is so sweet as a character. Ben Whishaw presents him perfectly. Whishaw is a man who has unlimited potential, and is a man to watch in the future. The character is a two pronged attack. His voice and also his presence work in tandem to create the charming young bear. His animation is incredible, every hair is accounted for and perfect.

Paddington is a film for the entire family. It is upbeat, touching, funny and British to its very soul.