The number of British and French lives lost in the First World War is huge, but there were many other countries that also suffered horrendous casualties. Not least of these was of course Germany and as well as Allied graveyards there are German cemeteries across Northern France.

On the Allied side the Canadians also made large sacrifices. So many men from the young country were lost at Vimy during the Battle of Arras that the French Government gifted the 240 acres of Vimy Ridge to Canada. Dominating the local area, Vimy Ridge was vital for German defence and was taken in 1917 at a cost of 3,598 lives by the four Canadian divisions of the British Expeditionary Force. This battle was particularly significant as it was the first time the Canadian troops had fought together as one unit. Their Brigadier General went so far as to claim that ‘In those few minutes I witnessed the birth of a nation.’ 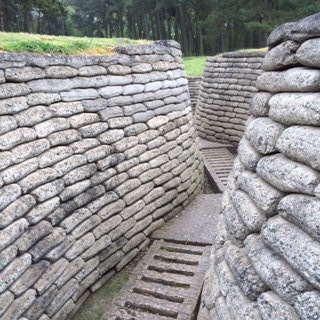 A grand memorial at Vimy by Toronto artist Walter Seymour Allward cost $1.5million to build in 1936, but the nearby trenches that have been preserved are far more evocative. The sandbag walls have been re-created with cement and display the deliberately curving design that aimed to prevent wholesale massacre. No Man’s Land cannot be entered because of the ongoing danger of unexploded mines, but it can be crossed by a path which leads to the trenches of the German army, only a few metres a way. As the Germans had time to dig in, and were intending to hold the line rather than advance, their trenches are – marginally – better made. You wouldn’t want to live in either though, especially when you hear about the two feet of water that often flowed through them. 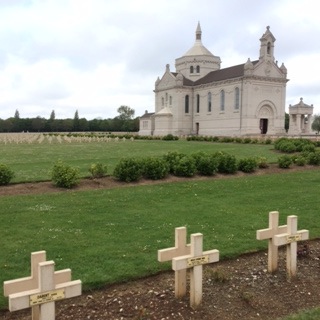 Notre Dame de Lorette is the French National Military Cemetery. 20,000 named French graves and the bodies of 22,970 more unknown soldiers are buried here. Located on a hill that was fought over for 12 months, it cost so many lives that it earned the nickname The hill of the 100,000 dead. The original chapel here was destroyed in 1914 and a large Romanesque-Byzantine hybrid has since been created in its place.  There is also a 52 metre tower with a small but interesting collection of artefacts and photographs on the first floor.

Currently (May 2014) an International Memorial is being created by Philippe Prost to commemorate the 100th anniversary of the start of WW1. Overlooking the French cemetery this will be an international monument that will transcend remembrance based on nationhood. It will be one of the biggest memorials in the world, bringing together 600,000 names from all nationalities, uniting friends and foes.

With so many WW1 sites concentrated in this part of France, 2014’s centenary commemorations will bring even more visitors than normal to Vimy and the surrounding areas. The battlefields, graveyards and monuments all combine to give visitors a complete historical account of one Europe’s most violent periods.

Entry to all sites are free of charge, and Canadian volunteers will act as guides to Vimy Ridge free of charge. For information on these and other war sites in the Nord-Pas de Calais area, visit Remembrance Trails or the Tourist board.

The Flaneur visited Vimy as a guest of MyFerryLink which operates 16 daily crossings on the Dover-Calais route.