I dislike hyperbole as much as the next fellow, but sometimes things have to be shouted from the roof-tops. We all know pretzels, the hard, shiny dough-based snacks that are a bit meh. With all the other choices available for snacking the pretzel has only ever occasionally entered my personal top ten favourite snacks  –  until a kindly soul led me to the Reading Terminal market in Philadelphia and directed me to the Amish section.

Wow! First of all you see the pretzels being made in front of you in a manner that makes you stop and gawp at the skill involved in making each doughy delight.

This is no mass production factory line, the movements required would take years to perfect and a robot would find it tricky to replicate. The prezel chef uses a pizza wheel to cut off a slice of dough. They roll it into a long tube and then grab an end in each hand. They twirl their hands in the air using a complex over and under hand movement that somehow ends in a twist from which it is claimed the phrase tying the knot comes from, as pretzels were once a Swiss wedding food. The three gaps in the dough represent the Father, Son and Holy Spirit, so the Pretzel is much more than just a snack dreamt up by a marketing department of a food conglomerate. Eat a pretzel and you are suddenly part of the religio-historical background of Pennsylvania and enjoying a real Philly delicacy – half of the pretzels consumed in the USA every year are made in Pennsylvania

The pretzels are then baked, dipped in butter, sugar and cinnamon and sold immediately. The word more-ish could have been invented for them. Softer than a doughnut, bigger than a giant’s hand these pretzels are the sort of thing that makes a man consider leaving his country and emigrating.  At the very least they make him type PHILLY SOFT PREZEL RECIPE into Google. 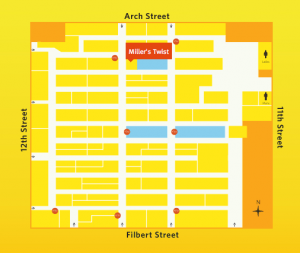 If you are in Philadelphia then it is vital that you try one of these pretzels. Forget what you think you know about pretzels and head to Reading Terminal Market, on 51 North 12th street. Study this map of the market before you go as it’s a big, busy place. If you have a few extra dollars on you, I’d like to say buy an extra cinnamon one and Fedex it to The Flaneur, but we all know it would arrive a little past its best. When will the boffins invent email that can send pretzels as attachments? What are they playing at? If only it was a military requirement to send pretzels along fibre optic cables. Then they’d have figured it out already and I’d be downloading pretzels along with the spam. Although maybe that would be dangerous. Delicious as they are, soft pretzels should be a treat that is indulged in only occasionally.

By which I mean only once a day.