SPOILERS: Do not read this if you have not seen Black Mirror ‘The Waldo Moment’

“The Waldo Moment”, the third episode of  the second series “Black Mirror”, created by Charlie Brooker, went on the air on Channel 4 earlier this year. This time Brooker has offered us another dystopia, taking place during a political campaign in UK. Electors are diverted by Waldo, a digital blue bear animated by the 33-year-old Jamie (Daniel Rigby). Though Jamie is a shy and frustrated guy, who does not gain any satisfaction from playing the role of Waldo, his animation is incredibly aggressive and mordacious. Following the Tory’s candidate in a crescendo of mockeries, Waldo gets a growing public appreciation, which eventually leads him to acquire an overwhelming power. As it happens, Waldo’s authority becomes independent even from his human voice and soul. Therefore, it does not surprise that in the final scene we find Jamie homeless and despaired, whilst Waldo has established an absolute and violent world-wide control. This is probably the reason while some critics have found the episode not particularly impressive or striking: «If this is a warning about what could happen, it’s too late because it’s already happening», wrote Neela Debnath. 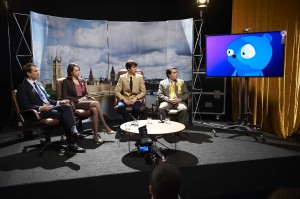 Indeed, one may wonder, whether “The Waldo Moment” has anything to do to with the Italian political situation. On the same day of Waldo’s broadcasting, national election were taking place in Italy and the Five-Stars Movement (M5S), a three-year-old political party leaded by the comedian Beppe Grillo, won a quarter of the Italian popular vote. One might say that the “The Waldo Moment” shares many similarities with the Italian political situation, due to Grillo’s well-known irreverence towards politicians of any sort. Moreover, Grillo has gained public consent by running a blog and creating a net of virtual relations among hundreds of groups located in the entire territory. Like Waldo, Grillo refuses to dialogue with other parties, planning to create a new democracy online. «Italian citizens need to participate directly in running their country, as they once did», Grillo told to the New Yorker.

However, to put Waldo and Grillo at the same level would be misleading. What really strikes is not Waldo’s political incorrectness, as Waldo’s (or Grillo’s) new strategy to take part in political competition. Waldo enters the public debate and dismantle it, because it is a virtual demon. It seems different from the others because it is a product of technology, but the truth is that the public debate is already corrupted to the roots. Decades ago television has substituted political contents and ideology, giving rise to a massive uniformity of ideas and life-styles. Not by chance the characters of the episode are devoid of personality: both the Tory’s candidate and the young Labour’s activist resemble Jamie’s lack of individuality. Waldo seems new and irreverent, just because there is nobody to challenge. Likewise, Grillo’s impertinence is directed against Italian political decadence and it is constantly reinforced by that. Therefore, he has reached the level wherein moralism and ideological indifference finally meet. But the real issue at stake in the Italian context is not whether Italians agree or not on Grillo’s points (transparency, consistency, efficiency, democracy), as the following: which kind of participation and information will they share? Are Italians aware of their cultural crisis and are they sure that social medias are the only effective tools to defend democracy?