Review: Ballgowns: British Glamour since 1950 at the V&A, London

The V&A celebrates the opening of the newly renovated Fashion Galleries with an exhibition of beautiful ballgowns, red carpet evening dresses and catwalk showstoppers. Displayed over two floors, ‘Ballgowns: British Glamour Since 1950’ will feature more than sixty designs for social events such as private parties, royal balls, state occasions and opening nights.

It is a shame that such a promising advert gave way to a dull and disappointing reality, for while the gowns were gorgeous, the exhibition left a lot to be desired.

Firstly, the gowns were not arranged by style, nor by designer or epoch, but by colour. This prevented any ability to compare and contrast the gowns with their contemporaries, to see the ebb and flow of styles or how the fashions, silhouettes, fabrics and designs changed over the years. As such, it was particularly difficult to see which gowns would have been unusual or experimental pieces: for example, the long, simple column of exquisite silk with a matching full length, straight coat, would have stood out as a statement amidst its 1950s fellows with their full skirts and hour-glass figures, but this exhibition reduced it to simply another peach dress amongst other peach dresses, with nothing particularly special about it.

By taking these gowns out of their contexts, this exhibition did not have a sense of the stories or history behind fashion. I felt this to be a very peculiar move for a museum. Fashion can be influenced by politics and the world in which it is developed: hemlines, colours and accessories reflect economic climates; the rise of women’s equality affected the female silhouette; the reach of worldwide media gave way to more elaborate designs and riskier experiments. These interesting narratives which could (and should) have been woven into the fabric of the exhibition were lost through the simplistic (and, in my opinion, lazy) approach of lumping gowns together simply according to colour. 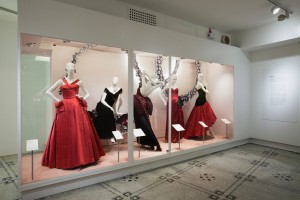 This grouping was especially bizarre given that the exhibition was described as showcasing formal attire from ‘the private event to the public parade’, from formal Court presentations and private balls to the red carpet celebrity galas of today, implying some sort of socio-historical shift in focus, and therefore time.

While I do concede that yet another chronological arrangement could be argued to be tired and expected, I maintain that ‘by colour’ was an ineffective decision. Why not try a grouping with a bit more depth to it? The literature of the exhibition argued for the skill of British designers in creating these gowns, with the ‘luxurious fabrics, intricate work and fine finish[es]’, so the gowns could have been organised by designer, showcasing the diversity of British art and skill. Yet, while each designer was given credit for each dress (resulting in a swathe of iconic names just as famous as their clients: David Sassoon, Vivienne Westwood, Zandra Rhodes, Catherine Walker, Alexander McQueen, Erdem, Stella McCartney), I could not see that such style, vision or technique had been incorporated into the display beyond mentioning it in a single sentence. It certainly wasn’t a central point. Indeed, the blocks of text explaining certain aspects of ballgown history seemed to be quite unrelated to the windows they were displayed by, adding to the discordance and confusion. 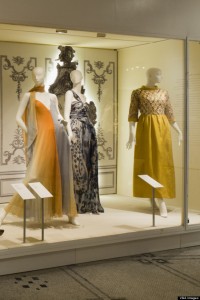 However, my disappointment in the lack of structure to this exhibition pales in comparison to my feelings towards the decision to use standard retail mannequins that can be found in any shop front to display these exquisite, unique gowns. With the information cards spouting sentiments such as “the ballgowns in this gallery are mostly couture pieces, handmade for a particular client…made up in their size and shape” and “ballgowns should…flatter the wearer and demonstrate her sense of style” it is an atrocity that they were displayed on identical mannequins. This collection was to celebrate the glamour, artistry and craftsmanship of haute-couture, yet resulted in many of the gowns looking like empty saggy sacks, badly fitted and not at all flattering, stylish or glamorous. Haute-couture is aspirational – it is set apart from the standard high-street, where things fit ‘well enough’ but not perfectly. The luxury of having a personal designer shape something exactly to your own unique form is a treat that most can only dream of, and therefore adds to the glamour of the occasion. The photographs included with some of the gowns showing them being worn proved that the designers had successfully suited the gown, in size, proportion and style, to its specific intended wearer, but this craftsmanship and detail was sadly lost on the mannequins. Female body shapes are greatly varied, and yet it was standard-issue modern supermodel-esq mannequins being used to present one-off, tailor made, haute-couture gowns. Insult was added to injury in the weird and unnatural positioning of the mannequins, looking more painful than elegant, and doing even further damage to the grace and glamour of the gowns. 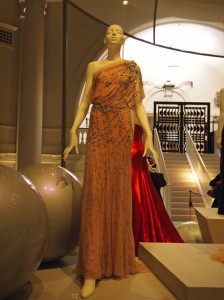 While I took issue with the grouping of the displays and the mannequins used, I did appreciate the staging of each window. Select items of furniture from the V&A collection had been reproduced as flat, life-sized photocopies, providing an appropriately sophisticated background for the ballgowns, but in simple, shadowy black and white. The result was a pleasing environment, suggestive of elegant and feminine dressing rooms, but neutral enough to allow the gowns to clearly stand out. However, I did think that a trick has been missed. The selection of furniture could have easily included large frames into which real mirror could have been placed, thereby enabling a more comprehensive viewing of the dresses. While some mannequins had been intentionally positioned to show off a specific detail, such as a backless feature or embroidery, not a single gown on the ground floor of the exhibition could be walked around. While space constraints probably played a large factor in this, the problem could have been reduced with strategically placed mirrors, which would have complemented the staging of the displays. Red-carpet designer Roland Mouret was quoted on the card accompanying gown eleven as saying that “designers have to keep in mind that the actress will be seen in 360 degrees and photographed from every angle”. Without central plinths or mirrors, a large portion of each gown was obscured and thus wasted, which was a great shame.

In perfect contrast to this supposedly showstopping, ticketed exhibition, the newly renovated free areas of the Fashion Galleries are beautiful. They are arranged chronologically so, in a glance, you can smoothly see the changes in fashion. The clothes are displayed on dress-maker dummies, correctly padded and proportioned, to show off each unique item to its best, and they are properly accessorised without being overwhelmed. The information cards are relevant and interesting, and the viewing flowed from each window to the next. It was glorious, and proved that the V&A is more than capable of putting together a well thought through, harmonious, enjoyable and informative exhibition, making this particular featured one all the more disappointing. 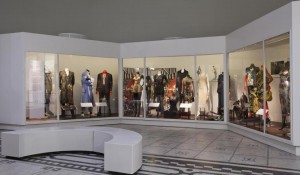 An afternoon appreciating British Glamour and Ballgowns with friends is a wonderful idea, but I would recommend saving your money for some cake in the gift shop, and spending your time enjoying the free galleries. This exhibition is not up to the standard I have come to expect from the V&A, and I can only hope that their complementary programme of events running over the summer are infinitely better structured, considered and enjoyable.