Umeå, the largest city in northern Sweden, has been chosen as European Capital of Culture 2014 and invites creative people to enter the contest called Artists Caught by [Umeå], where Umeå welcomes the whole world’s reflections and interpretations of Umeå and northern Sweden. 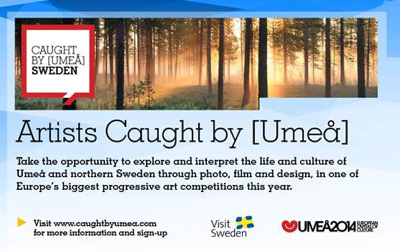 Located about 600 km north of Stockholm and about 400 km south of the Arctic Circle, Umeå is the biggest city in northern Sweden and one of the fastest growing cities in Europe. The culture of the Sámi, the EU’s only indigenous people, and their unique eight seasons each year is an important element in this region’s traditions and cultural life. In Umeå, a progressive and dynamic cultural life is perceived as a necessity for continuous positive growth.

Take the opportunity to explore and interpret life and culture in northern Sweden through PHOTO, FILM and DESIGN, in one of Europe’s biggest progressive art competitions this year. € 3000 for each of the three final winners are at stake!

You don´t have to be from Umeå or northern Sweden yourself, you don´t even have to have been there, all inspiration is available on  www.caughtbyumea.com – use your imagination!

The competition will be open for entries until the end of June 2013.