The damp track surface in Spielberg, Austria made for an exciting fifth round of the Porsche Carrera Cup Deutschland. Frenchman Kévin Estre (Attempto Racing) once again added his name to the winners’ list at the Red Bull Ring on Sunday. Second place went to Germany’s Christian Engelhart (Konrad Motorsport) with Norbert Siedler (Aust Motorsport) from Austria scoring third. “The proper use of the tyres and optimal air pressure was my secret in such weather. I tried to preserve the tyres as long as possible so that I was still fast on the drying circuit. At the moment things are simply going really well for me,” explained Estre after clinching his fourth win from five Carrera Cup races. 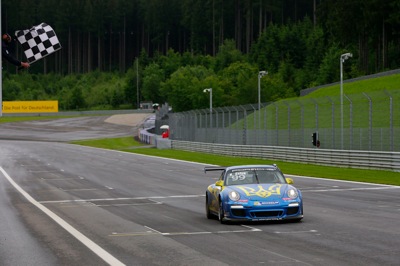 Kevin Estre wins the Spielberg round of the Porsche Carrera Cup Credit: Porsche

Due to a fluffed start, Siedler lost his hard-won pole position advantage. Estre, who had taken up the race from second on the grid, pulled past the 30-year-old Tyrolean and held tight to his lead position for the rest of the race. In the 32-strong field from eleven nations spectacular fights for positions were played out: Initially the rain-soaked track proved slippery but gradually dried up. Austrian Philipp Eng was the only driver to opt for slicks: After the start this at first threw him back to the last spot, but several laps before the chequered flag he ploughed through the field to pocket sixth place. 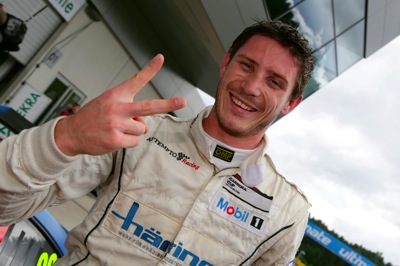 Races six and seven are contested from 14 to 16 June on the Lausitzring. On the 3.478 kilometre circuit in the state of Brandenburg, the drivers in their 450 hp Porsche 911 GT3 Cup racers can look forward to overtaking manoeuvres on the long finish straight. The twisty infield demands precision driving. Fans get a great view of the Porsche pilots with the grandstand on the finish line holding 25,000 spectators.

Points’ standings after 5 of 17 races: