Never before have I been so inspired by the extensive creativity, determination and fortitude of a single individual. Now Canadian Fashion designer, Lucian Matis, has been an inspiration to me from the moment I watched his vivid creations grace the runway. Lucian Matis is my favorite Canadian fashion designer because he knows how to be successful in a competitive industry, is humble despite his overwhelming recognition, and has the mind of a creative artist.

Anything worth having is never easy to achieve, especially in an industry as competitive as the fashion one. Lucian Matis clearly outlines the steps for achieving success with insightful knowledge even the most inexperienced of designers can work towards. In an interview with Slice TV, the designer states,

“Learn everything you can about fashion, about cutting, sewing, master the details and immerse yourself in the world of fashion, […] about business […] how to write a business plan, to raise money, to sell and promote yourself – and never ever give up!” (Matis, Slice TV) Having jumped over the hurdles himself, Matis` advice is priceless, and I intend on heeding his words.

The modest Lucian is truly wise beyond his years, and proves that age is just a number when achieving success. As an infant, Matis was introduced to the world of fashion, having his first customer at the tender age of seven. As I hope to be, Matis is a graduate from Ryerson University. In fact, Matis graduated early as his talents were recognized by his professors. The designer was presented with many various fashion awards as well as having been published in and on many prestigious magazines internationally. After showing his first collection in L’Oreal Fashion Week 2007, accolades and praise quickly followed when Matis was featured in an in-depth profile on Fashion Television and made a special guest appearance on the finale of my favourite show, Canada’s Next Top Model. Lucian was then invited to participate on the first season of Slice TV’s hit reality-TV show, Project Runway Canada, wherein he took a very contentious second place. Even with his success, Lucian continuously grows with each passing experience.

“I really learned to trust and believe in myself, my skills, my talent, my vision; in other words, my own voice,” says the esteemed designer. “Also, I learned to be on my own, to work hard, to focus and to go after what I believe in. But all the while being a good person, courteous and not jealous or nasty.”

Lucian’s open minded, humble, and unique personality is reflected in his clothing. Unlike so many of the garments which are seen on today’s runway, Matis has collections which are both creative and wearable. Each individual garment is a reflection of his own personal take on beauty, and has intricate, breathtaking details that further screams passion and effort. Matis brings a new flavour to Canadian fashion. He states, “I’m originally from Romania and European fashion is more individualistic. I want to bring more creative garments to Canadian fashion.”

Another trait which I admire about Lucian Matis is his ability to find the beauty within almost anything. He says he finds his inspiration “all around [him]. [Through] music, art, the sunset, travel, architecture, a great movie, a deep conversation, a passing thought. Beauty and ugliness inspire [him] all the same. At times [he finds] a mud puddle extraordinary! [He believes] nature inspires [him] above all. It is the only element that achieved perfection!” Matis has a distinct, signature style which allows him to stand out from the others. He knows how to make a woman look and feel her very best. For him, fashion is about more than just clothing.

Overall, Lucian Matis is an intellectual, creative and inspirational artist wise beyond his years. It is for these reasons that he is my favorite Canadian fashion designer.

I was inspired by him to create my own fashion designs…. check a sample out below and see more here 🙂 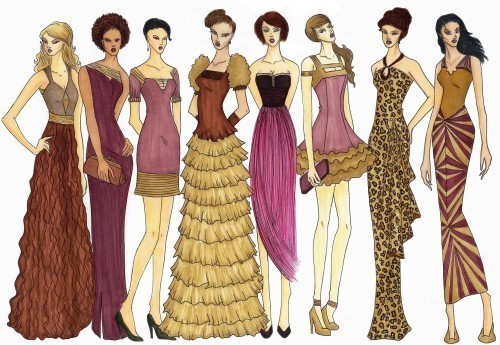